Some Residents Taking Fighting Wildfires Into Their Own Hands

As wildfire seasons worsen, a growing number of rural residents are buying and outfitting fire rigs and other equipment to protect their property and themselves.,

Photographs and Text by Ilie Mitaru

PALISADES, Wash. — Molly Linville vividly remembers the “wall of flame” that tore through the grasslands of her 600-acre ranch during the Sutherland fire four years ago. Working quickly, she managed to guide her 125 cattle into the irrigated field surrounding her home three hours east of Seattle. After that day, Ms. Linville resolved she would never go through an experience like that again.

Ms. Linville is one of a growing number of Americans across the rural west who are taking fire management into their own hands: buying surplus fire trucks, construction rigs and converted military vehicles online to protect their homes and land. Some have maintained fire defenses for decades. Others were spurred by a close call with a recent wildfire.

Many professional firefighters look warily on the movement, concerned it may give untrained homeowners a false sense of security, especially when residents disregard evacuation orders to stay and fight fires.

Deputy Chief Nick Schuler, a spokesman for Cal Fire, California’s firefighting agency, put it starkly: “A person who has a gun and can fly in a helicopter doesn’t make them trained for war. And just because the civilian is able to buy a fire engine, does not make them properly trained to utilize it.”

Marin County fire Battalion Chief Graham Groneman advises residents to invest in home hardening, the process of modifying a home so it is more fire-resistant, and defensible space rather than heavy machinery. He worries that residents eager to protect their property may put themselves at greater risk.

Still, he says his department tries to work collaboratively with property owners who are determined to help fight a fire. “They want to take some ownership in the protection of their property. That’s a very American ideal and a core fundamental right.”

It’s a right that property owners across the west are increasingly willing to exercise.

Nicholas Holliday began building up his own fire defenses when he moved to Burnt Ranch in Northern California nine years ago to start a cannabis farm.

Such defenses are common in the Emerald Triangle — Humboldt, Trinity and Mendocino Counties — where farmers began cultivating marijuana decades before legalization. Those early growers, ineligible for fire insurance, developed a culture of self-reliance and skepticism of government agencies.

“Each year I’d grab at least another piece of equipment,” Mr. Holliday said, who has become one of the largest growers in Trinity County. “It’s not if your place is going to burn, it’s when.” 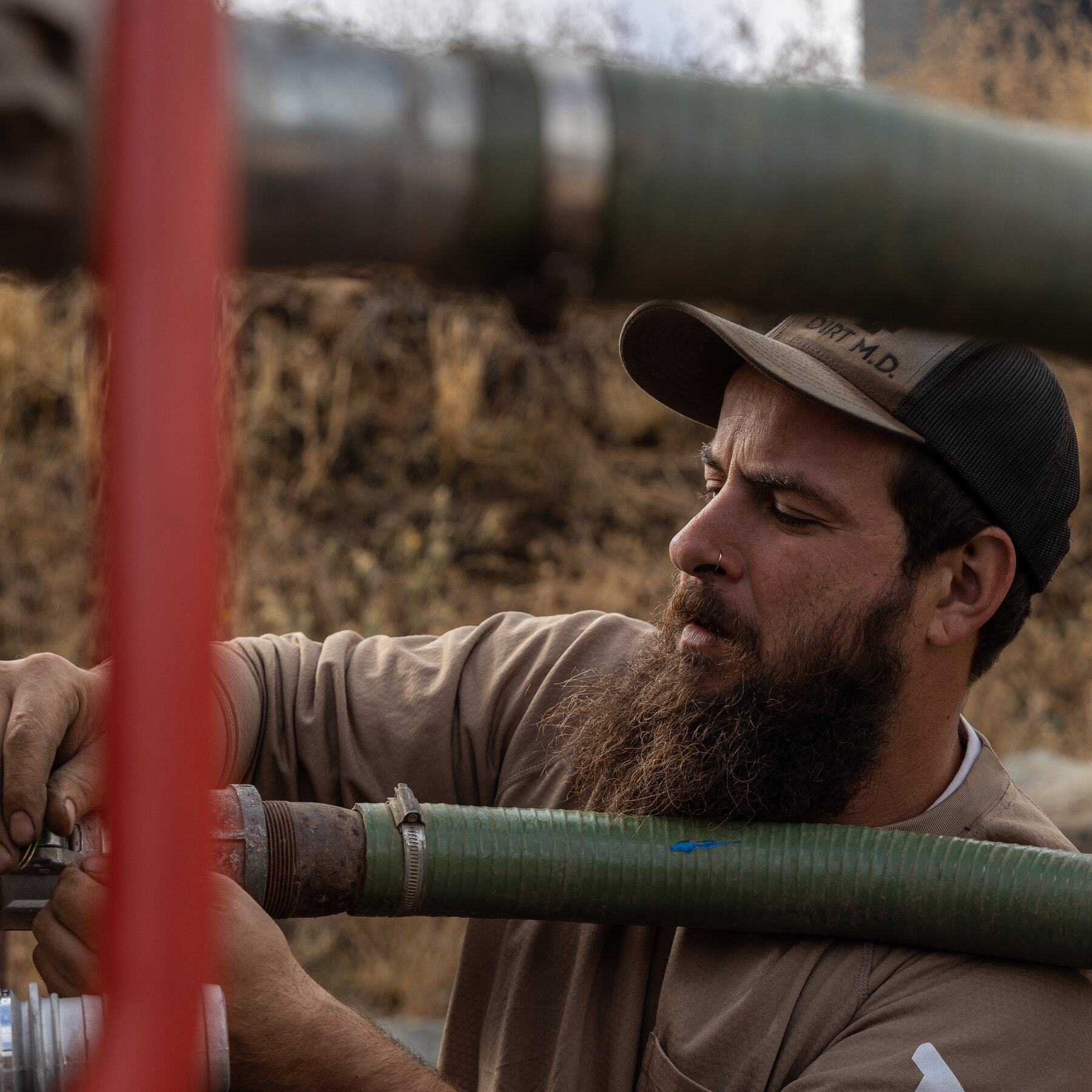 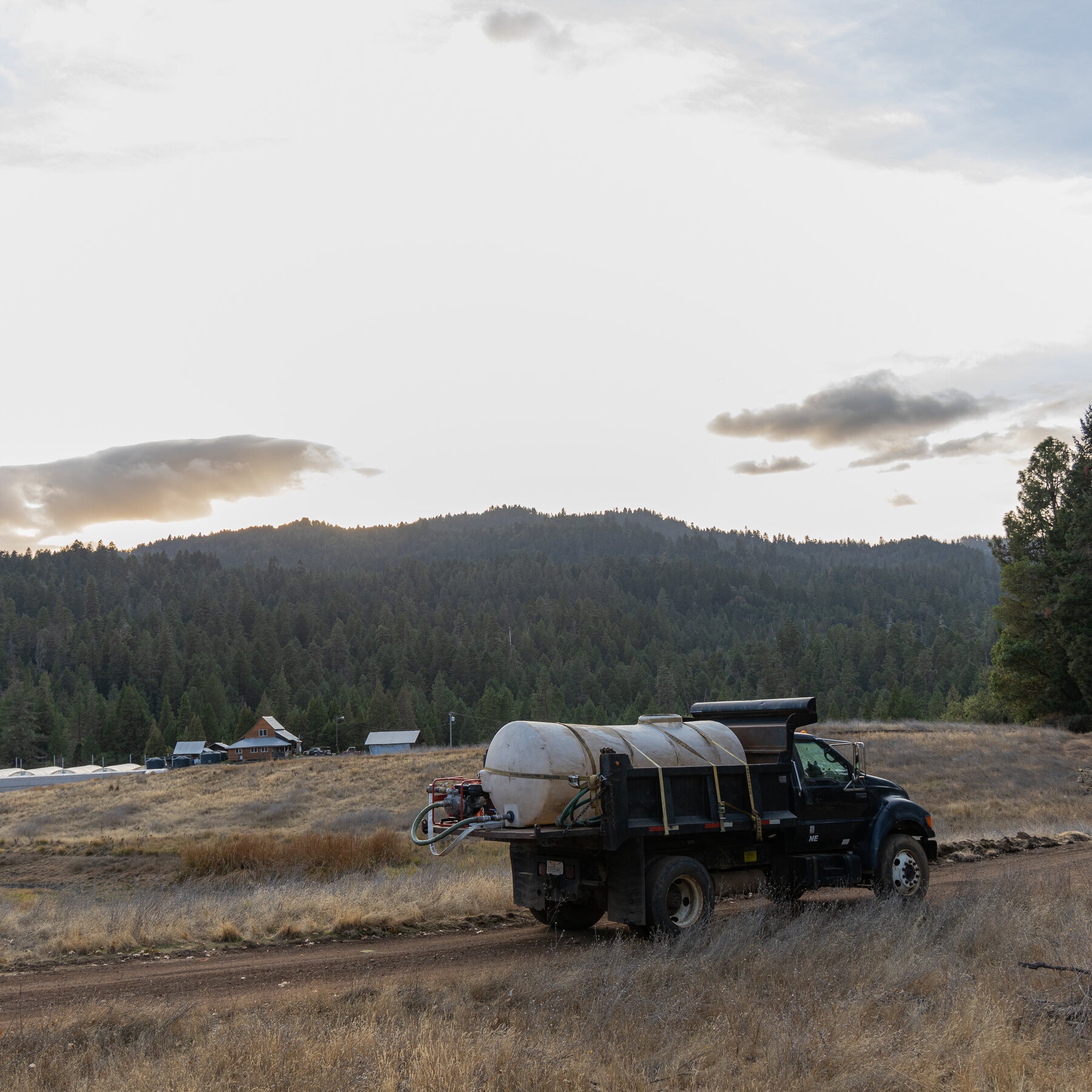 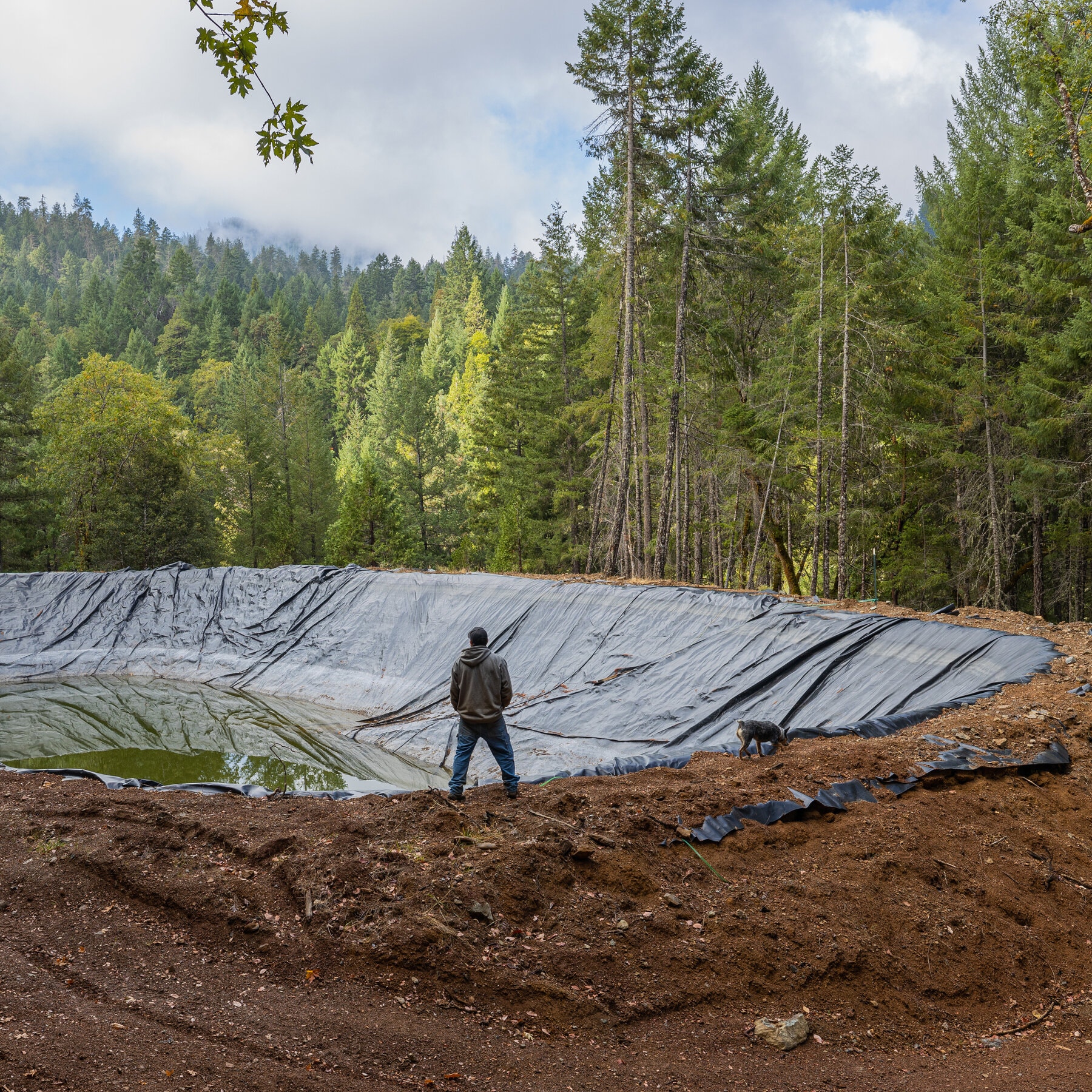 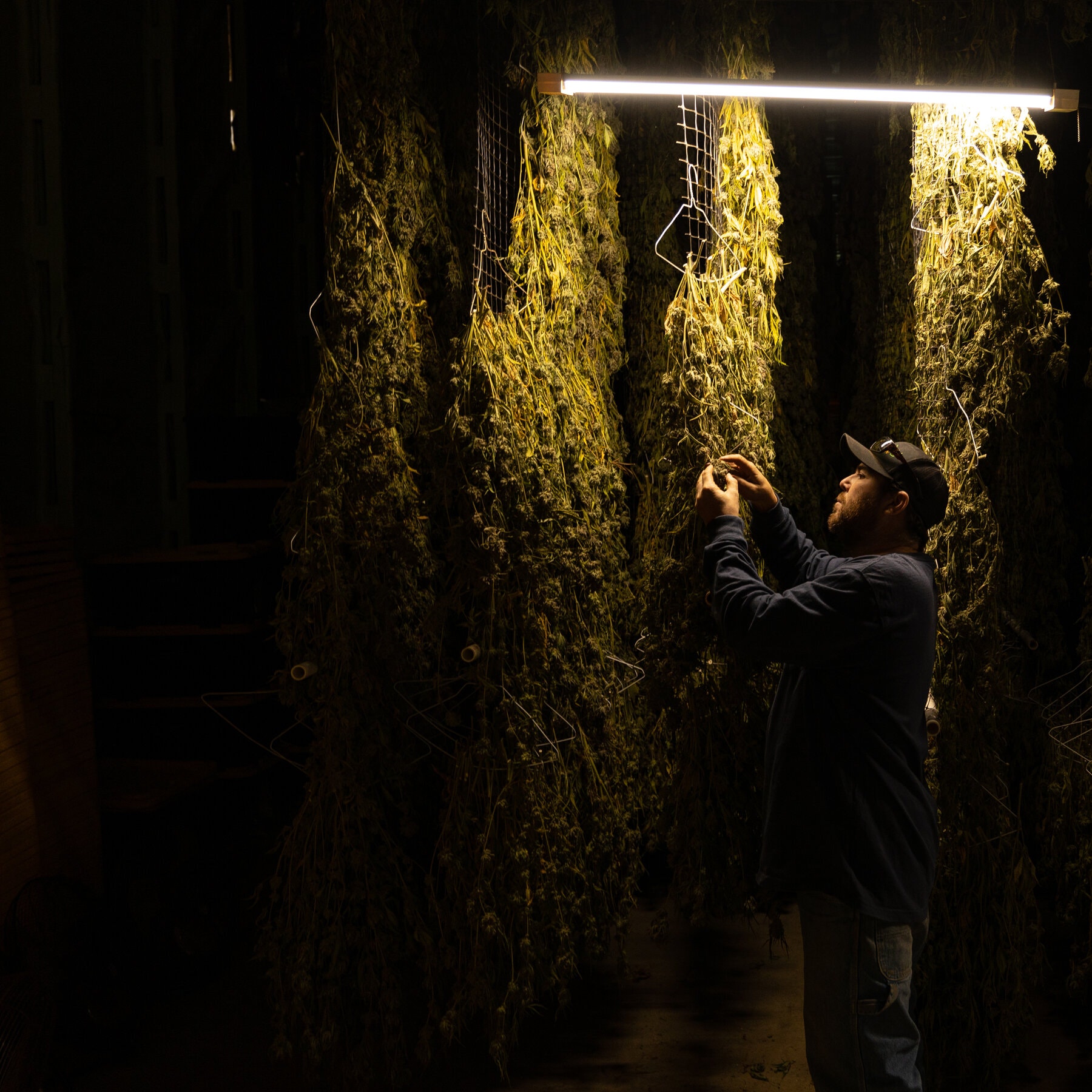 Clockwise from top left: Alex Odell, who works on Mr. Holliday’s farm, installing a new water pump on a converted dump truck; the farm, Trinity Sungrown, in Burnt Ranch; Mr. Holliday inspecting his crop; Mr. Holliday at his 1.5 million gallon cannabis irrigation pond, which he also uses to supply water for his trucks.

Last August, Mr. Holliday was ordered to evacuate as the Monument fire approached the region. But leaving would have meant forfeiting the entire season’s crop. Instead, using back roads to avoid evacuation checkpoints, he and a group of residents stayed.

They readied a converted box truck and a converted garbage truck, both retrofitted with 2,000 gallon tanks. They dug fire lines with a bulldozer, encircled their homes in hoses, and slept in shifts to monitor the fire. They maintained the routine for the nearly six weeks the evacuation order was in place.

Professional fire agencies strongly oppose this approach. “We’ve seen people who refused evacuation orders and warnings and then at the very last minute, when they realized they should have left, it puts firefighters in harm’s way,” Mr. Schuler, of Cal Fire, said. “We try to go save them. Ultimately, it can cost them their lives or lives of firefighters.”

But Mr. Holliday sees it differently.

“I don’t know when we took responsibility off the ranchers and homeowners and put it on the Forest Service and the firefighters to save us,” he said. “No one is going to save you. I ain’t waiting for Prince Charming.”

As the Dixie fire moved through the Sierra Nevada, the tiny town of Taylorsville, some 250 miles east of Burnt Ranch, was put under evacuation orders three times within 60 days.

“I’d burn to death before I ever left home,” he said.

At first, Mr. Pearce made his nightly rounds alone, spraying down structures to prevent them from burning. As the threat continued, he bought two more water trucks and recruited friends to help.

“Maybe I’m crazy,” he said, “but it just seemed like somebody had to do something, because nobody was here.”

Matt Sanders, a fire engine captain with the United States Forest Service, said he understood residents’ desperation to protect their properties but added that without training, doing so could be extremely risky.

“I don’t think that anybody who doesn’t have training should be out there fighting fire, for any reason,” said Mr. Sanders, who fought the Dixie fire in August. “Prevention goes a lot farther than protection,” he said.

As word of Mr. Pearce’s efforts spread, community members began to offer their own equipment for cheap, or even free — if he could get them running. A GoFundMe raised more than $25,000 to help pay for fuel and repairs.

Mr. Pearce said he is committed to building up his arsenal for the coming years. “We’re going to try and get enough stuff built out, so if we have a fire around here we can go put it out and not have to wait on the agencies.”

In some remote parts of the West, an alternative model to firefighting has gained popularity: State officials are training and equipping local community members to fight fire.

Dale and Patricia Martin formed what’s known as a Rangeland Fire Protection Association in Silver Creek, Ore., in 2000. One hundred volunteer members serve the region — 780,000 acres of sagebrush and grassland that borders the Malheur National Wildlife Refuge in Southeastern Oregon.

“I just felt like the rural area needed something so we could get there more quickly than they could get out to us,” said Mr. Martin, 84, who runs a country store and archery shop with his wife.

Silver Creek members pay $50 to $500 in annual dues, based on acreage. The funds go toward converting donated military equipment into firefighting machinery.

Marvin Vetter, the state of Oregon’s coordinator for rangeland associations, said the volunteer model appeals to rural communities. “The people get to decide on the level of protection and the rate and who’s responding or the training,” he explained. “It’s not the government telling them, ‘Thou shalt do this.'”

The Silver Creek association’s 19 trucks are stationed at landholders’ homes across the region. Members receive wildfire training, protective gear and communications equipment. The goal is to dispatch trained local volunteers to contain fires until government agencies arrive. Mr. Martin estimates that they respond to about eight fires a year.

“I just want to see neighbors helping neighbors and people getting along and being helpful to each other,” he said.

After the Sutherland fire burned through her ranch in 2017, Ms. Linville lobbied for legislation to recognize rangeland associations in her state. When the effort failed, she bought a fire truck for $5,000.

“We don’t have the luxury to wait for permission,” she said.

Her ranch sits mostly on unprotected land, outside the jurisdiction of state or federal fire agencies. 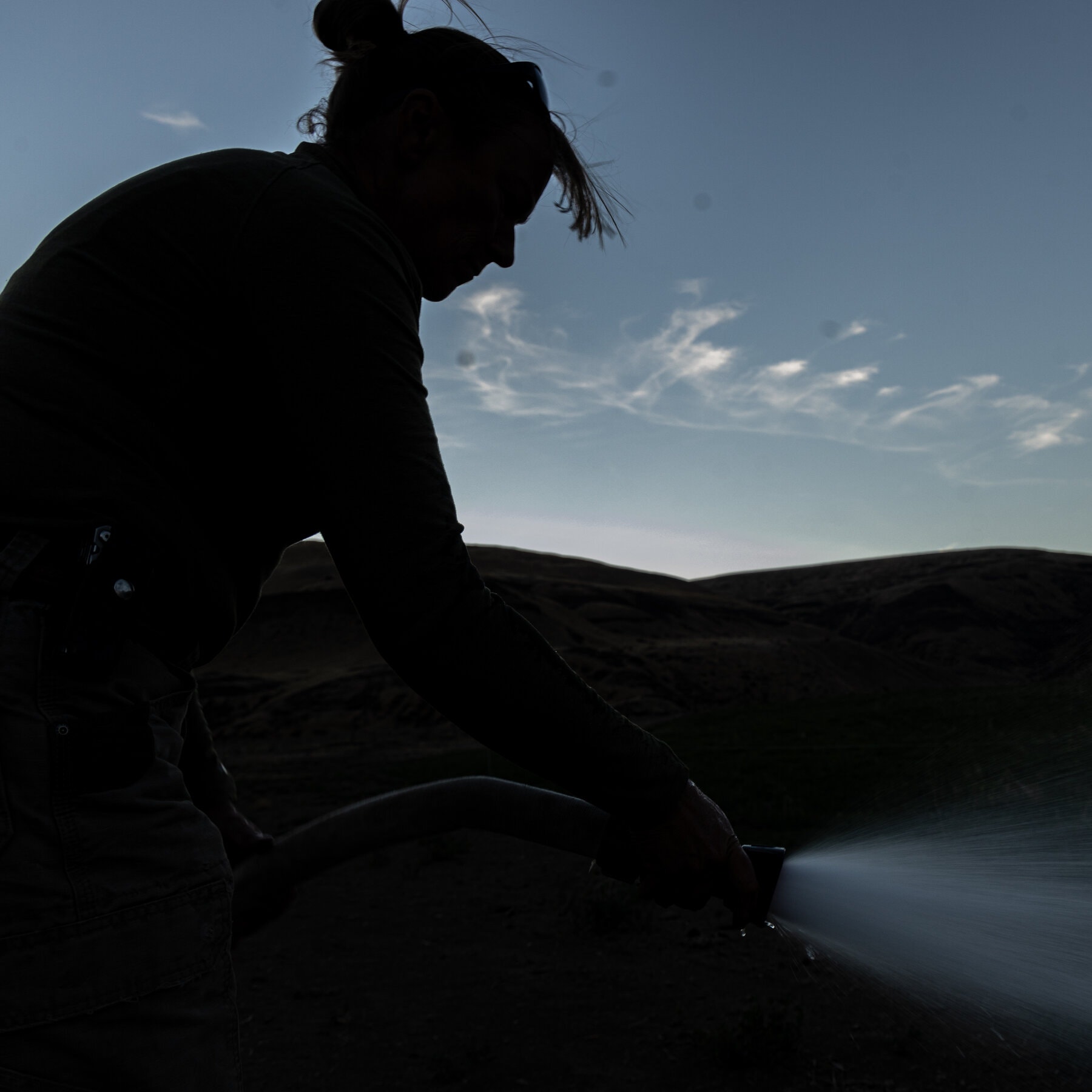 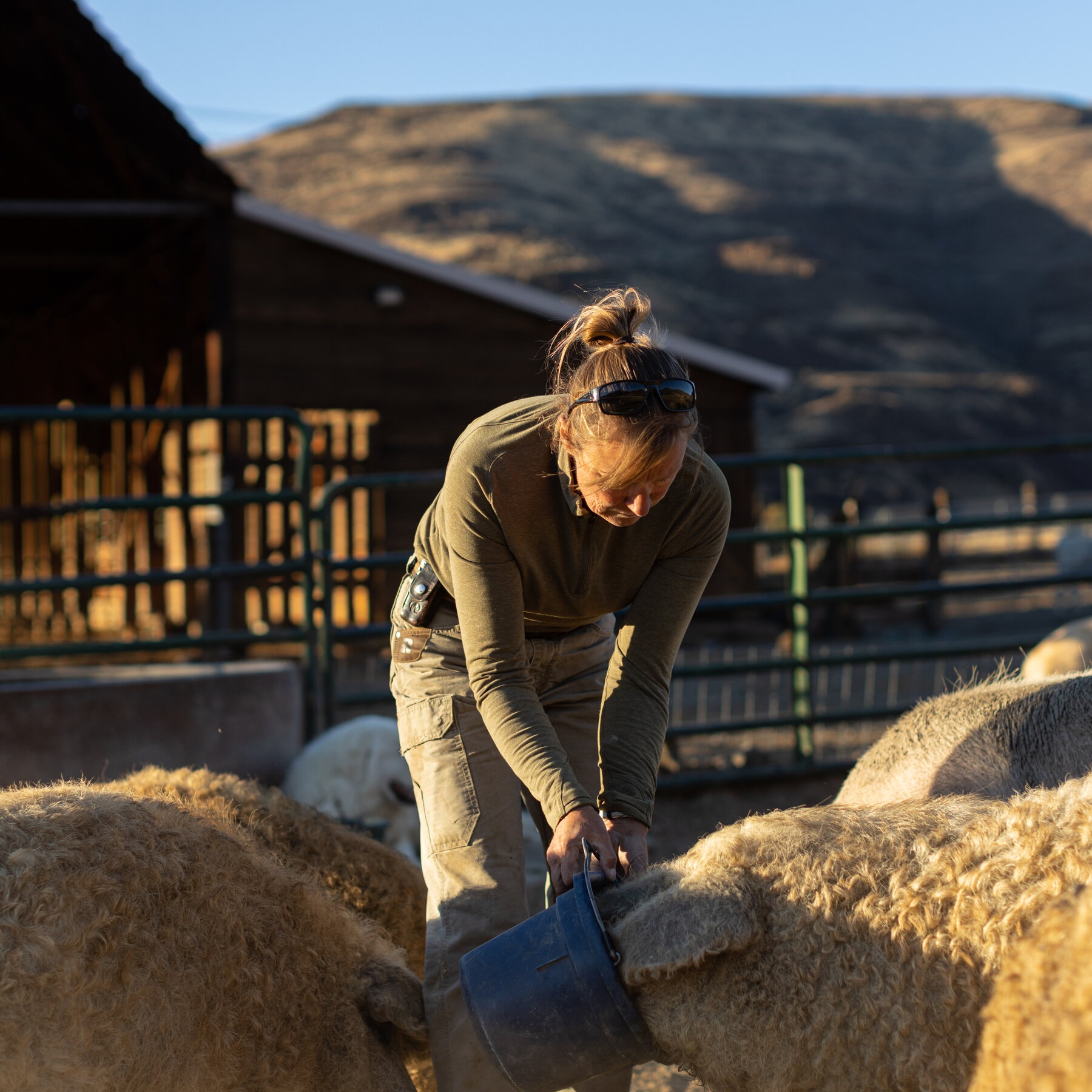 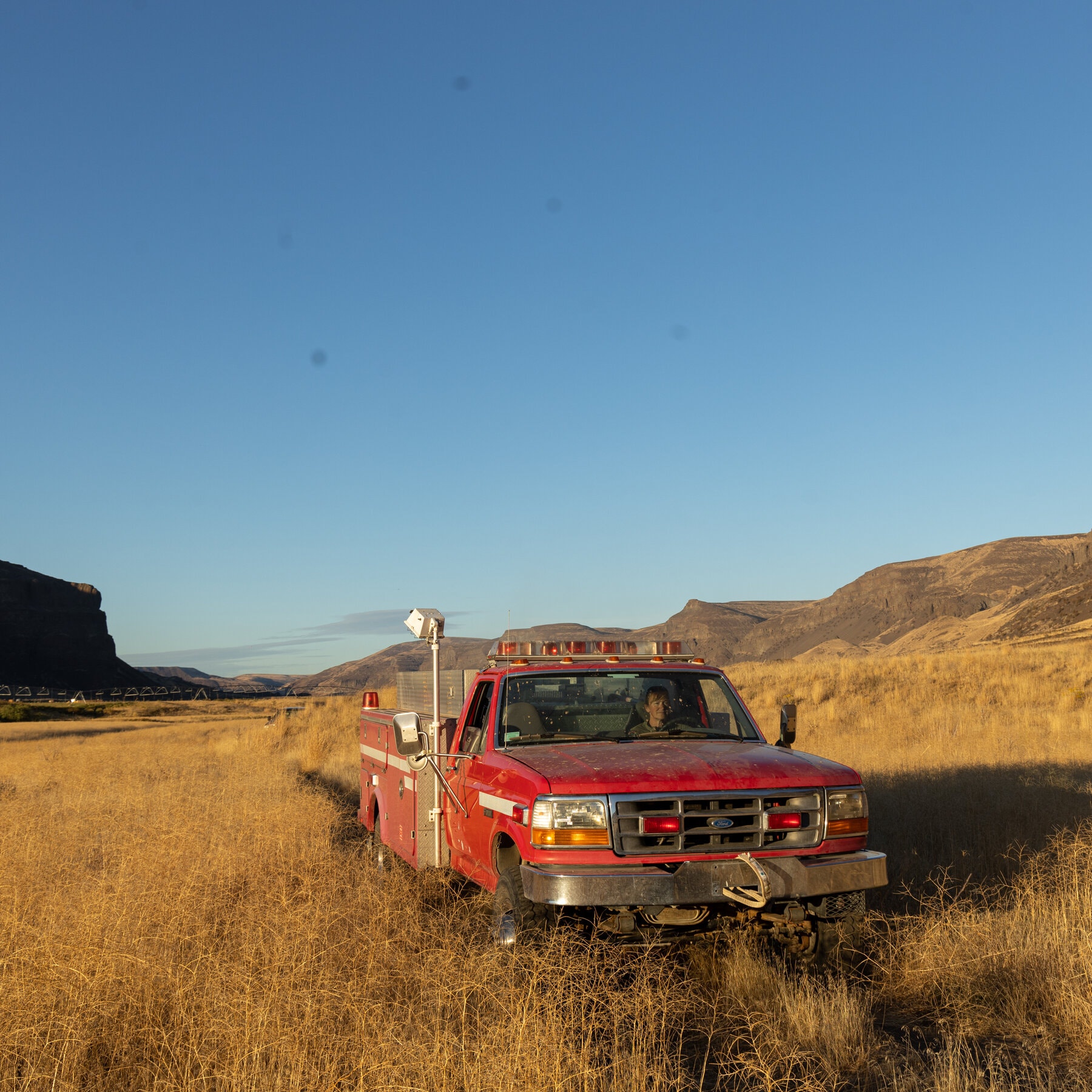 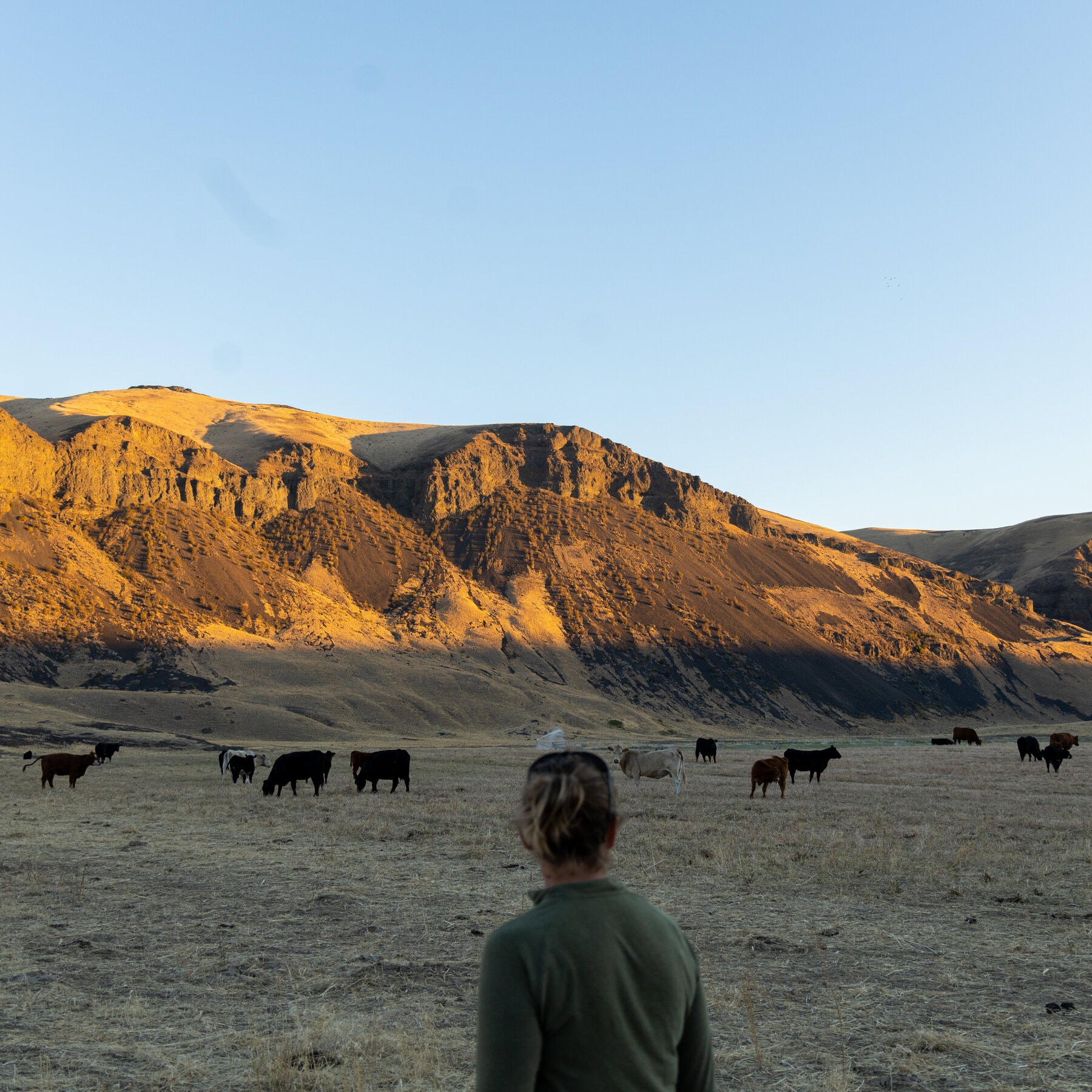 Clockwise from top left: Ms. Linville testing the hose on her water truck; feeding her Mangalitsa pigs; her ranch also has 60 cows; her firetruck is a model from 1997.

Ms. Linville and her neighbors use a Facebook page to report smoke. She said they have stopped several fires from getting out of hand in the fast-fuel grassland plains.

“We know the land, and it makes all the sense in the world that we would be the ones fighting the fire out here,” said Ms. Linville, who started her career for the U.S. Fish and Wildlife Service and maintained her annual wildfire training for a decade.

“In my firefighting history, this was called the ‘Asbestos Forest.’ We never came here,” Robert Seals said, describing the region in Los Gatos where he moved after a five-decade career fighting fires. “And then three years ago it started.”

Mr. Seals can tick through a list of close calls to his property, including the CZU Lightning Complex fire last year.

He worked his first fire at 17 — lying about his age to be hired. He went on to lead a team that specialized in felling large trees during fires in some of the most rugged terrain in the West.

He began building off-road vehicles to carry water through rough terrain. Through a contract with fire agencies, he would allow them to use his vehicles, and he would work the fires as well. 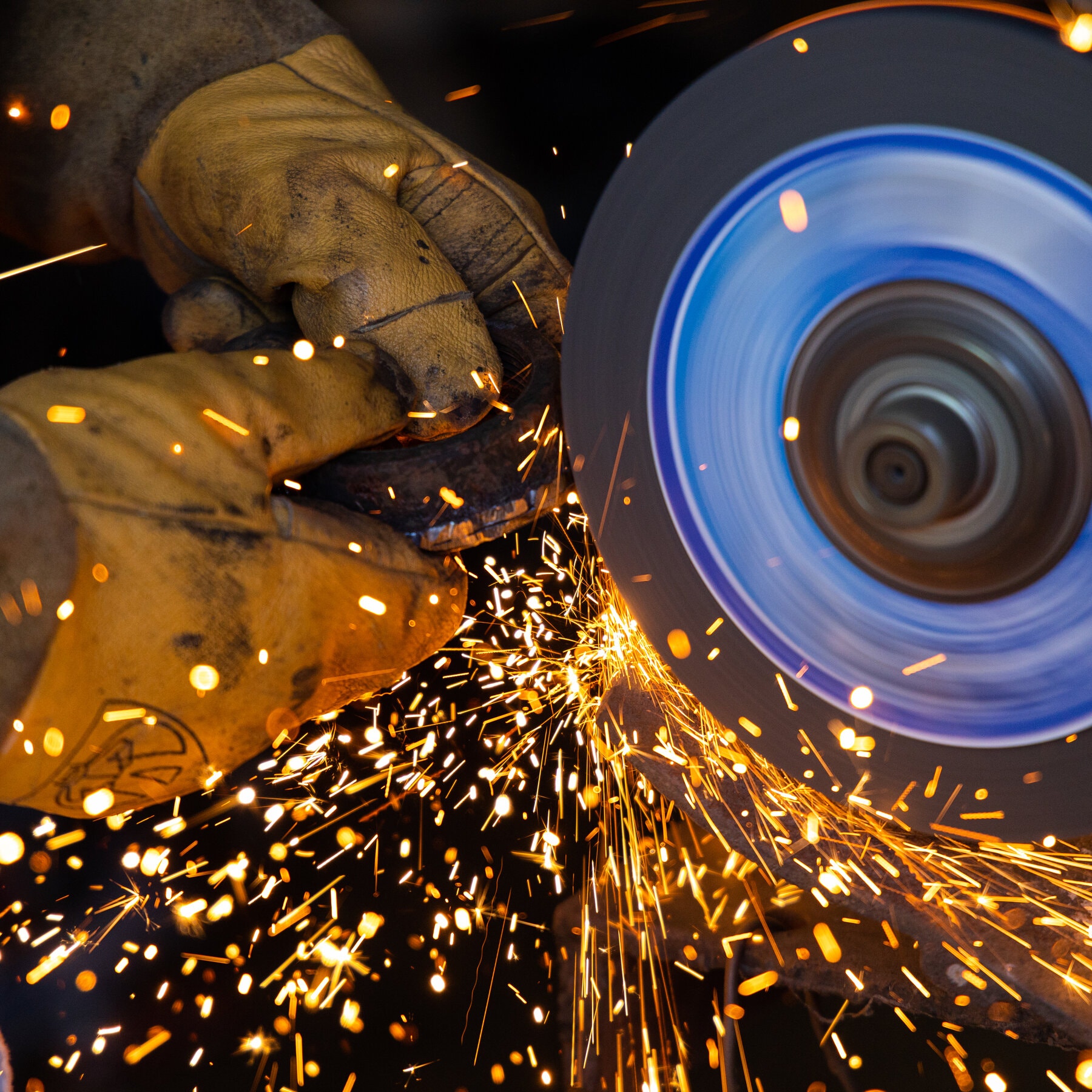 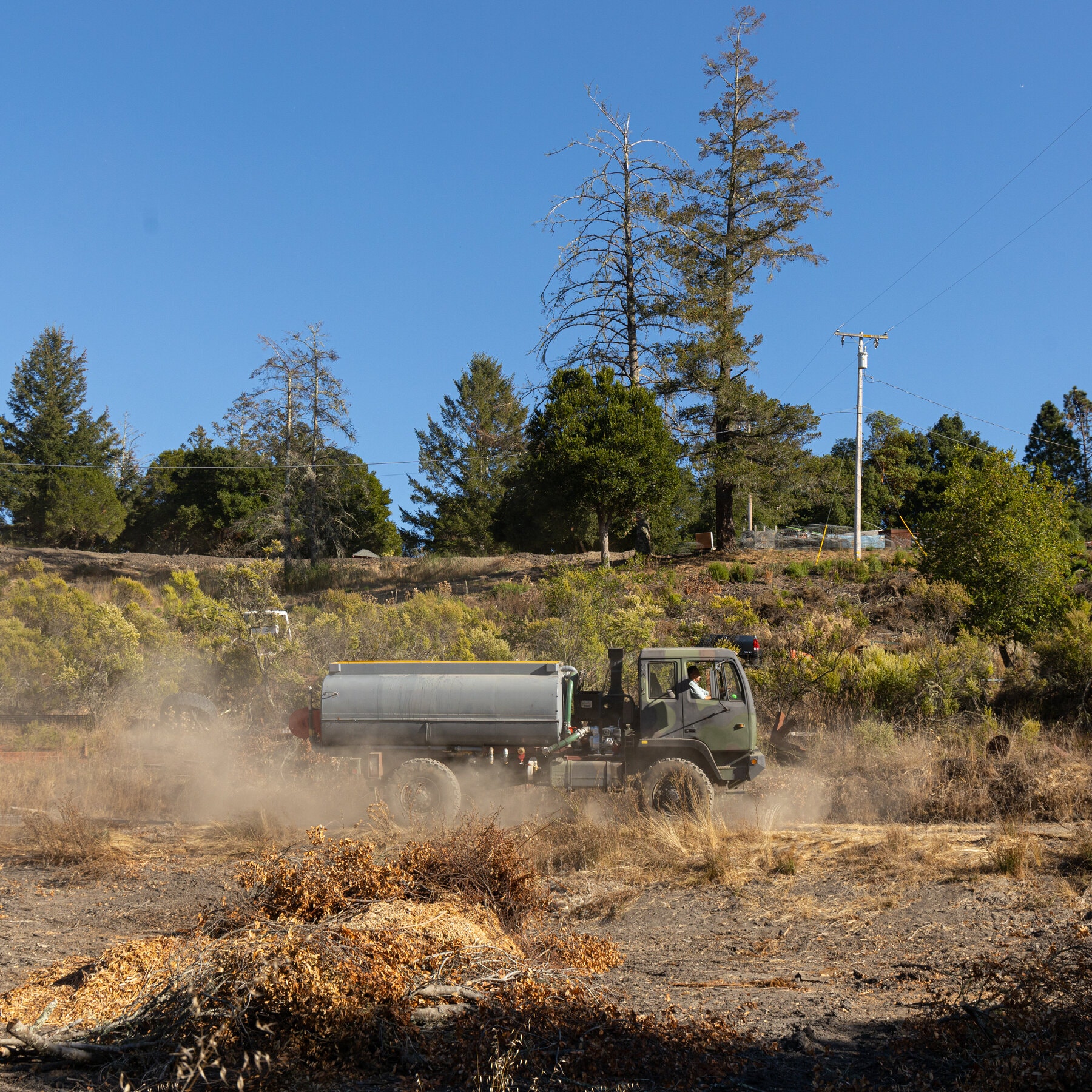 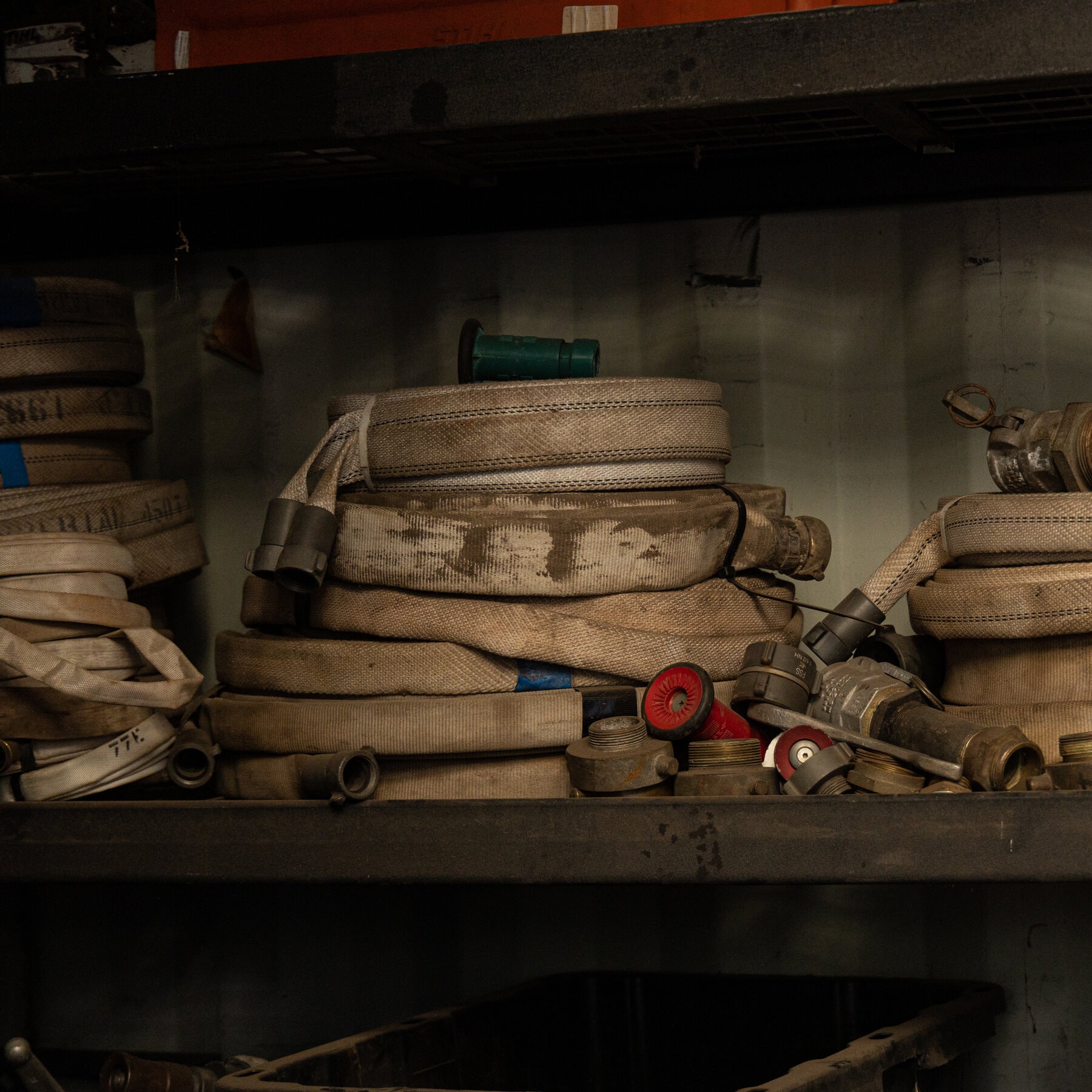 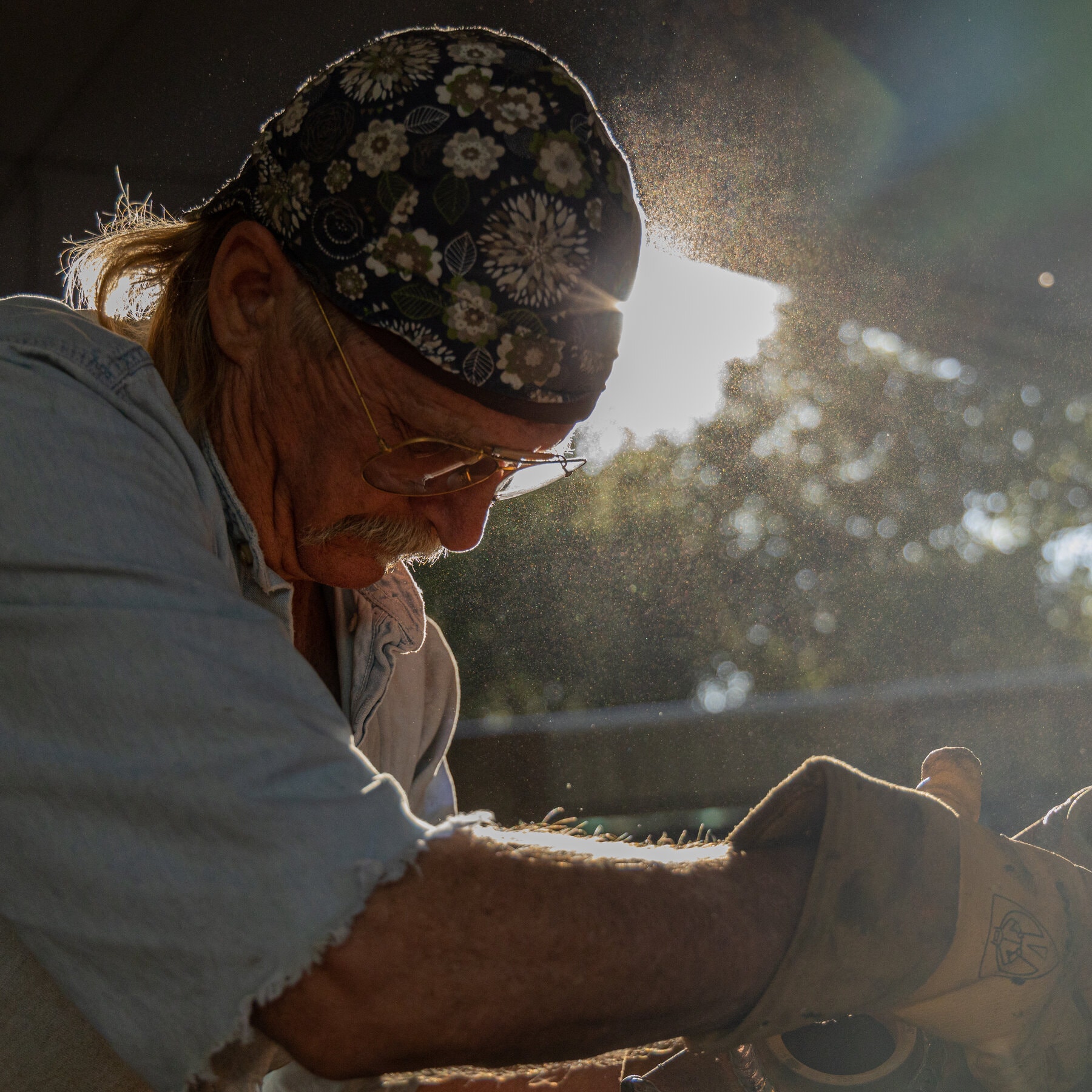 Clockwise from top left: Mr. Seals working on a hose fitting for one of his trucks; he uses a converted military troop carrier outfitted with a 2200-gallon tank; he sells many of his trucks to private customers; a collection of hoses in his shop.

Now 76, he is building trucks again. But his vehicles sell mostly to individuals or communities looking for protection.

He is a fierce proponent for personal fire defense. Fire Breakers, his company, consults on fire risks and clears shrubs, brush and other fuels surrounding homes.

“All Cal Fire wants you to do is leave. That’s why all they talk about is the to-go bag; I’m the to-stay bag,” he said. “Yes, leave when you’re told if you don’t know what you’re doing — but there is so much you can do before you leave.” 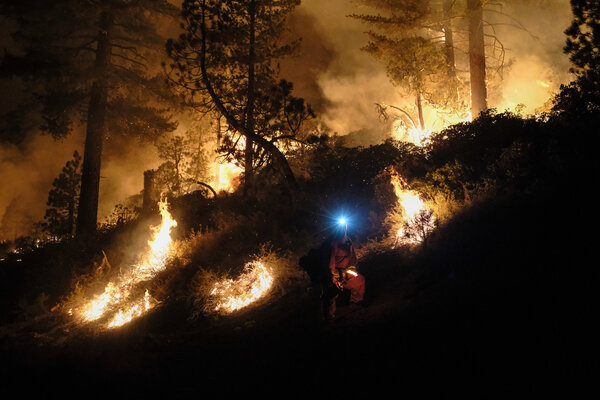 Inside the Massive and Costly Fight Against the Dixie Fire

To battle the nearly one-million-acre Dixie fire, California launched a military-style operation. Some experts wonder whether that approach is sustainable.

In a Reversal, Meadows Refuses to Cooperate With Jan. 6 Inquiry