The fiery trail astonished viewers in Ohio, Michigan and Indiana, with many first thinking it was a meteor.,

During pre-dawn hours on Wednesday, the object — possibly a Russian military satellite — flew over Ohio, Michigan and Indiana, leaving a fiery trail and breaking apart into smaller pieces during its descent. 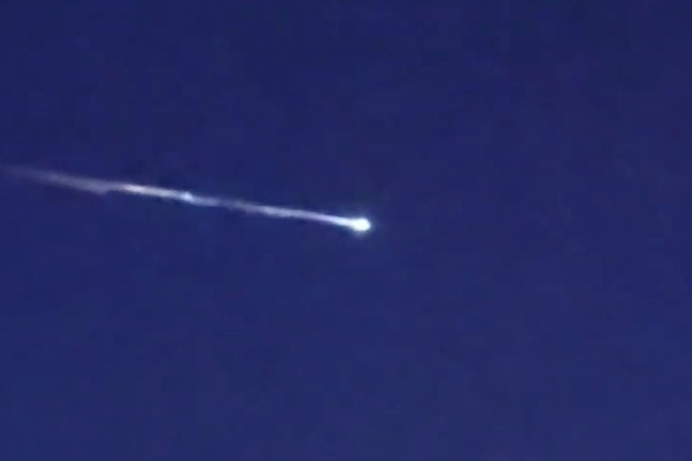 During pre-dawn hours on Wednesday, the object — possibly a Russian military satellite — flew over Ohio, Michigan and Indiana, leaving a fiery trail and breaking apart into smaller pieces during its descent.CreditCredit…Max Roberts

Something streaked across the night skies over Ohio, Michigan and Indiana during predawn hours on Wednesday. The fireball burned in hues of green, gold and pink, leaving a bright trail in its wake. It spent about two minutes breaking apart into smaller pieces during its descent from orbit before crossing over the border of the United States and Canada, somewhere over the Great Lakes.

“I saw it coming across the sky,” said Stephanie Neal, a Williamsburg, Ohio, resident who saw the object. “It first had no tail, then a tail, then no tail again.”

“This was astonishing,” another witness in Batavia, Ohio, said in a report to the American Meteor Society, which maintains a hotline where people can report fireballs they see in the sky, which are typically rocks breaking up in Earth’s atmosphere. “Especially because we have a full moon tonight and yet it was still so bright and visible.”

It was not an unexplained aerial phenomenon, as the Pentagon describes U.F.O.s these days, nor was it even a meteor from the Orionid shower, which peaked early on Thursday morning.

Instead, it was probably a recently launched Russian military satellite that had been showing signs of failure, according to orbital trackers, before plunging through Earth’s atmosphere and burning up.

The classified Russian spacecraft, identified by a U.S. Space Command database as COSMOS 2551, launched on Sept. 9 from Russia’s Plesetsk Cosmodrome, about 500 miles north of Moscow.

Few details about the satellite were acknowledged by the Russian military, but it was headed for an orbital path over Earth’s poles. Russia’s Ministry of Defense said the launch and satellite deployment were successful.

But almost immediately after reaching space, satellite trackers noticed a gradual descent in the spacecraft’s altitude.

“Ninety-nine percent certainty it was a failure,” said Jonathan McDowell, a Harvard astronomer who tracks objects in orbit and was closely monitoring the Russian satellite.

The satellite likely burned up in the atmosphere without hitting land, Dr. McDowell said.

“Re-entries of Russian satellites over the U.S. happen now and again — maybe a couple times in the past five years or so, off the top of my head.”

Russia’s Ministry of Defense did not respond to requests for comment.

Sky watchers have witnessed other major uncontrolled re-entries of old or errant spacecraft this year. Sometimes objects associated with launches survive the return to the surface, like a pressure vessel from part of SpaceX’s Falcon 9 rocket that crashed in a man’s farm in Washington in April. Then in May, large chunks of debris from a Chinese rocket splashed into waters off the Maldives in the Indian Ocean.

It was unknown where exactly the pieces of China’s rocket, a Long March 5B, would re-enter Earth’s atmosphere. That uncertainty renewed calls for more specific international rules governing space activities. NASA’s administrator, Bill Nelson, criticized China at the time, saying Beijing was “failing to meet responsible standards regarding their space debris.”

While a 1972 United Nations treaty makes nations liable for damage caused by objects launched from their territories, there are little in the way of international rules curbing the conditions in space that could create damage — like a dead spacecraft tumbling back into the atmosphere. In recent years, U.S. officials have called for new rules of the road to adapt to an increasingly busy orbital highway as numerous companies, including Elon Musk’s SpaceX, aim to send thousands of internet-beaming satellites into low-Earth orbit.

“As more goes up, more will come down,” Mike Hankey, an amateur meteorite hunter who manages the American Meteor Society’s fireball database, said of recent cases of space debris causing pyrotechnic sky shows. “It is not really my favorite thing to work on, but it is happening a lot more and the system can track it well.”

Meet an Ecologist Who Works for God (and Against Lawns)