Some mass vaccination sites in U.S. close as demand begins to fall.

Tens of thousands of open appointments at sites across the country are forcing officials to adjust their outreach strategies and zero in on smaller events.,

Some mass vaccination sites in U.S. close as demand begins to fall.

By Adeel Hassan and Noah Weiland

Some county health departments that couldn’t keep up with vaccine demand a month ago have now started closing some of their mass vaccination sites for lack of customers, and some counties are declining vaccine shipments.

Now that more than half of adults in the United States have received at least one Covid-19 vaccine dose and the country has surpassed 200 million administered doses, demand for shots appears to be slowing in many areas.

White House and health officials are comparing the next phase of the vaccination campaign to a get-out-the-vote effort. Officials in many states are looking beyond mass vaccination sites and focusing on having patients vaccinated at their doctors’ offices, where they are more at ease — a shift that will require the Biden administration to ship vaccines in much smaller quantities.

The seven-day average of vaccinations has declined somewhat in recent days, to 2.86 million doses a day as of Friday, from a high point of 3.38 million last week, according to a New York Times analysis of data from the Centers for Disease Control and Prevention.

What is emerging is an unequal landscape in which some places have more supply than demand and others have more demand than supply. In Seattle, for example, more than 200,000 people are on a waiting list for vaccines at city-run sites. Local officials have requested and are now receiving additional doses through a federal program.

At a news conference on Friday, Jeffrey D. Zients, the White House’s Covid-19 response coordinator, acknowledged that the pace of vaccinations nationally would ebb. “We expect daily vaccination rates will moderate and fluctuate. We’ve gotten vaccinations to the most at risk and those most eager to get vaccinated as quickly as possible,” he said. “And we will continue those efforts, but we know reaching other populations will take time and focus.”

Even with persistent vaccine hesitancy, the reasons for the dip in vaccination rates are still not entirely clear. Injections of Johnson & Johnson’s vaccine were halted last week as federal health officials investigated a potential rare side effect, and this may have had some effect on daily tallies, with millions of doses now sitting on shelves and yet to be allocated. On Friday, a panel of C.D.C. advisers recommended lifting the pause on the vaccine for all adults and adding a label about an exceedingly uncommon, but potentially dangerous, blood clotting disorder.

While every person 16 and older in the country became eligible for a coronavirus vaccination on Monday, falling demand has pushed Mercer County, Ohio — where 27 percent of adults have at least one dose — to announce the closing of its mass vaccination site on May 7.

In the first few months of the year, the site in the county, which has 41,000 residents and borders Indiana, would fill up its 400 appointments in an hour or two, said Jason Menchhofer, the county health administrator. But demand has fallen precipitously in the last several weeks, and last week the county ended up wasting two doses, which was a first.

“We no longer have a reserve of people who want to be vaccinated to reach into to show up and take those doses,” Mr. Menchhofer said.Officials in Palm Beach County, Fla., said that the county would shut its three mass vaccination sites, which are operating at about half capacity, by the end of May. Of 16,000 appointment slots available this week, only 6,000 were filled, according to health officials. Instead, three mobile units will each aim to give 500 doses a day.

In Galveston County, Texas, a mass drive-through clinic at a county park won’t operate after May 1. The park has been administering 5,000 doses per day, including on Thursday. But demand for appointments has dampened in the last three weeks, according to the county’s chief public health officer, Dr. Philip Keiser. He also asked the state to pause vaccine shipments.

“We’re concerned that some of it may expire before we use it, if we keep getting it,” Dr. Keiser said.

There will be much more targeted outreach, down to the census tract level, Dr. Keiser said, and there might be 100 or 200 injections per day rather than thousands.

“We got about 50 percent of our people vaccinated,” he said, “and we recognize that next 25 percent is going to be a lot harder than the first.” 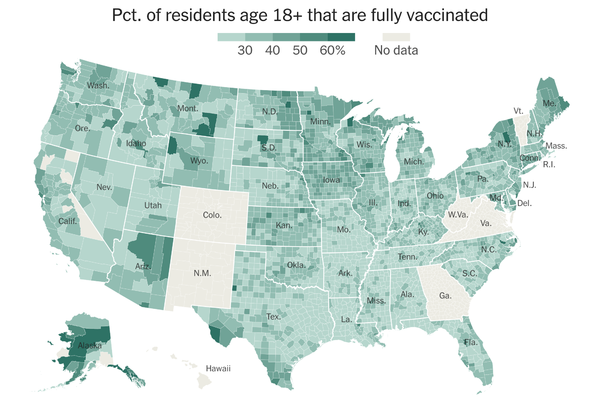 8 Are Killed as Sandstorm in Utah Causes a Highway Pileup