The first lady and the surgeon general visited an elementary school in Virginia as part of a strategy to enlist schools in promoting the vaccine.,

The first lady, Jill Biden, and the surgeon general, Dr. Vivek Murthy, visited an elementary school in McLean, Va., that is running a coronavirus vaccine clinic for its students.

“Nice to see you all. Hi.” “Sir, how are you? Hi.” “So everyone here has already had?” “Everyone here has been vaccinated.” “Good for you!” [clapping and cheering] “I know that getting vaccinated isn’t always the fun thing to do. I don’t like needles myself. So let’s give a round of applause to all the brave kids here who got their shots. [clapping and cheering] So many have — you have asked me over the last couple of months, you know, ‘When is the vaccine coming? When is it coming?’ And now it’s here, not just another way to protect your kids against Covid-19, but as Dr. Murthy said, ‘It’s the best way.’ 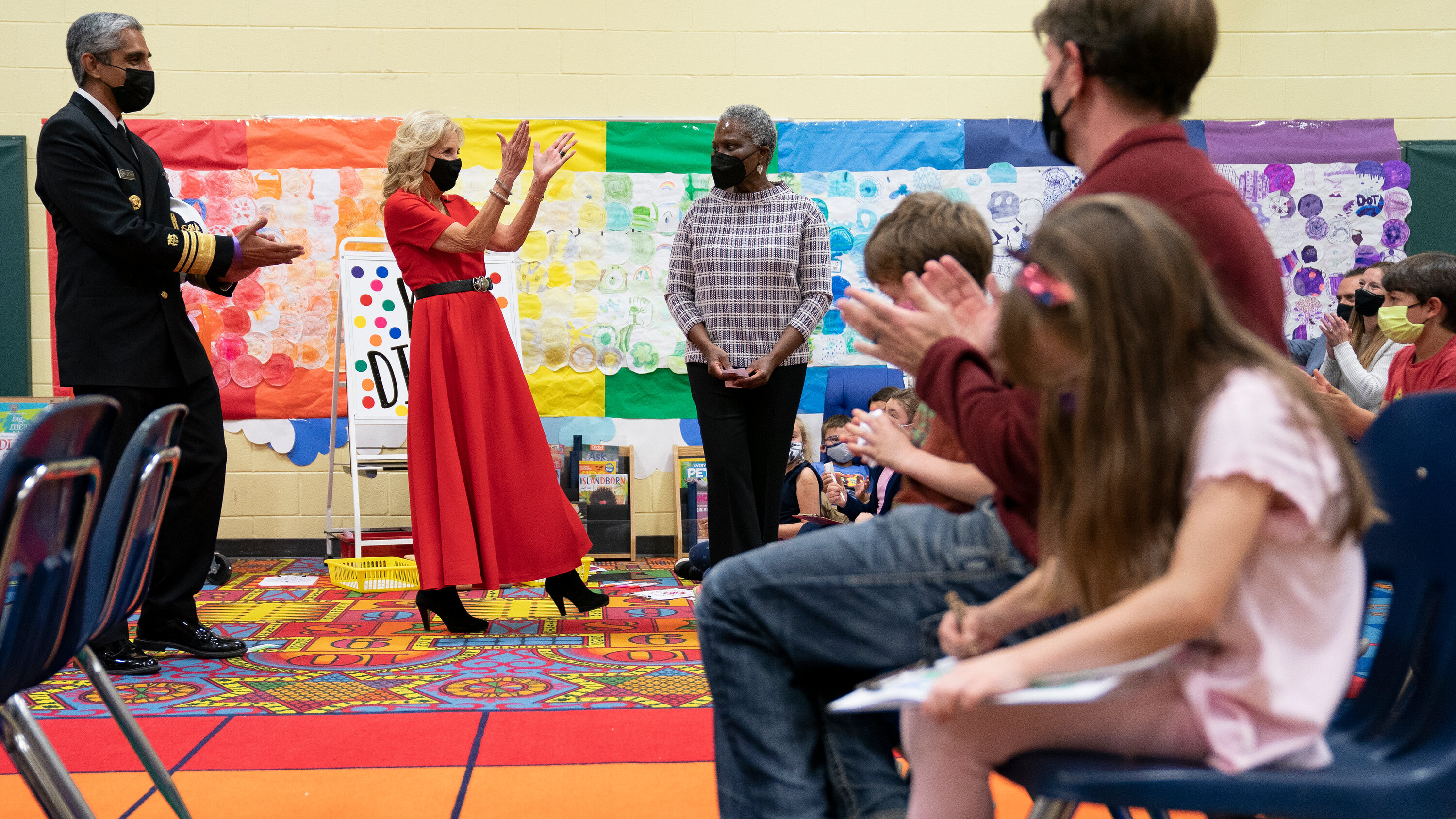 The first lady, Jill Biden, and the surgeon general, Dr. Vivek Murthy, visited an elementary school in McLean, Va., that is running a coronavirus vaccine clinic for its students.CreditCredit…Stefani Reynolds for The New York Times

McLEAN, Va. — Franklin Sherman Elementary School made medical history in 1954, when 114 of its students became the first healthy American children to be vaccinated against polio as part of a nationwide clinical trial. They called themselves “polio pioneers.”

On Monday the school again earned a place in the spotlight, by running a coronavirus vaccine clinic for its students that the first lady, Jill Biden, visited with the surgeon general, Dr. Vivek Murthy. Dozens of young children, accompanied by their parents, trooped through its brightly colored gymnasium to get their shots.

The visit kicked off what White House officials said would be a national push, led by Dr. Biden, to persuade parents and guardians to vaccinate 5- to 11-year-olds now that the shots are available to them. The administration has already shipped 15 million pediatric doses across the country to doctors’ offices, children’s hospitals, community health centers, pharmacies and schools, with the goal of vaccinating all 28 million children in the age group.

Dr. Biden offered a simple and direct message to parents: “This vaccine is the best way to protect your children against Covid-19. It’s been thoroughly reviewed and rigorously tested. It’s safe. It’s free, and it’s available for every child in this country.”

Public health experts view vaccinating young children as a critical step toward bringing the pandemic under control. The Food and Drug Administration authorized the Pfizer-BioNTech vaccine for children 5 to 11 at the end of October, and last week the Centers for Disease Control and Prevention endorsed it.

It is too soon to tell how the rollout is going. The C.D.C. will not release data on how many young children have been vaccinated until Wednesday, officials said.

But at Franklin Sherman Elementary in the suburbs of Washington, demand was high. The school has 355 students and quickly filled all 260 appointments at Monday’s clinic, run by the Fairfax County Health Department. Dr. Biden and Dr. Murthy, who said he was eager to get his 5-year-old vaccinated, handed out stickers to students who had just gotten their shots.

“You guys are leaders,” Dr. Biden told them, “so thank you for being so brave.”

Later, the two addressed students and their parents. “The truth is that Covid is not harmless in children,” Dr. Murthy said, adding, “We have tragically lost hundreds of children to the pandemic.”

The administration’s campaign to vaccinate young children does not look at all like the rollout for adults, nearly a year ago. There are no mass vaccination sites. Pediatricians and pharmacies are doing much of the work. The vials — and the needles to administer doses — are smaller.

The administration is also hoping that schools like Franklin Sherman will play a major role. On Monday, Xavier Becerra, the secretary of health and human services, and Miguel A. Cardona, the education secretary, sent a letter to school superintendents and elementary school principals across the country urging them to encourage vaccination, including by holding clinics.

The State of Vaccine Mandates in the U.S.

A growing number of employers, universities and businesses are now issuing some form of a vaccine requirement. Here’s a closer look.

But getting parents comfortable with vaccinating their children has sometimes been difficult, even when the children are older. In more conservative areas of the country, school officials are treading lightly in promoting the vaccine.

A survey by the Kaiser Family Foundation, published last month before the F.D.A.’s authorization for younger children, found that 27 percent of parents said they would “definitely not” get their 5-to-11-year-olds vaccinated against the coronavirus. An additional 33 percent said they would “wait and see” how the vaccine was working before getting their children the shots.

That was not the case nearly 70 years ago, when Dr. Jonas Salk announced that he had invented a vaccine against poliomyelitis, the virus that causes polio. President Franklin D. Roosevelt, who was paralyzed by polio, led the push to eradicate the disease, known then as “infant paralysis” because it so often struck children. (Senator Mitch McConnell of Kentucky, the Republican leader, also contracted the disease when he was two and walks with a slight limp as a result.)

By drawing attention to Franklin Sherman Elementary, the White House hoped to remind the public of that earlier era, when the country pulled together to fight a terrifying threat. When Dr. Biden and Dr. Murthy arrived on Monday, they chatted with the school principal, Kathleen Quigley, against the backdrop of two easels displaying black-and-white photos of children getting their polio shots 67 years ago.

The school and its “polio pioneers” are mindful of their place in history. One of them, Jackie Lonergan, now 75, told The Washington Post that parents did not question whether their children should get Dr. Salk’s experimental vaccine. (In a rare interview in 1993, Dr. Salk told a reporter that his vaccine had offered “freedom from fear.”)

“We were very patriotic then,” the newspaper quoted Ms. Lonergan as saying. “The war was over and the country was booming. It was a very optimistic time.”

The school’s current students are mindful as well. Dr. Murthy and Dr. Biden were introduced by Everett Munson, a 6th grader who had studied the history of polio in one of his classes. He said he was “looking forward to going places” — including visiting his cousins — “without worrying that I could get Covid-19.”

Everett also had a suggestion for those running the clinic. “Maybe we should take an idea from the polio vaccine at Franklin Sherman,” he said. “Everyone should get ice cream after their shots.”

Gov. Whitmer After Michigan School Shooting: ‘No One Should be Afraid to go to School’