The Caldor fire, which emerged over the weekend east of Sacramento and grew significantly on Tuesday, is one of several blazes wreaking havoc in the state.,

Another fire is growing in California, east of the state capital.

As another day of hot, dry weather began in California on Wednesday, the two largest blazes burning in the state — Dixie and McFarland — were no closer to being contained than they had been 24 hours earlier.

That wasn’t the only bad news. The Caldor fire, which began on Saturday, had chewed through a total of about 54,000 acres by Tuesday evening, mostly in the preceding 24 hours, according to a New York Times wildfire tracker. The fire’s rapid spread forced the authorities to issue an mandatory evacuation order on Tuesday for Pollock Pines, a community of 7,000 people that is less 60 miles northeast of Sacramento, the state capital.

“It’s pretty darn close,” John Woodworth, the manager of a mobile home park in Pollock Pines, said of the fire in an interview with The Sacramento Bee newspaper, hours before the community was evacuated. “If the wind shifts, we’re in trouble.”

The Caldor fire has chewed through a far smaller area than the number of acres burned by the Dixie (more than 600,000) or McFarland fires (nearly 100,000). But as of Tuesday night it was not at all contained, while Dixie was 31 percent contained and McFarland was 51 percent contained. Cal Fire, the state’s the state’s firefighting agency, described the Caldor blaze as a “dynamic and rapidly developing incident.”

Officials in Northern California have said that high winds, low humidity, dry ground and scorching temperatures are combining this week to produce a drastically elevated fire risk, at least through Wednesday.

In one sign of that concern, Pacific Gas & Electric began shutting off power for about 51,000 customers in 18 of the state’s counties on Tuesday evening. It cited potential sustained wind gusts of up to 40 miles per hour, along with “extreme to exceptional drought conditions and extremely dry vegetation,” as contributing to the risk that power lines could start wildfires. The utility said that power should be restored on Wednesday after weather conditions improve.

The cause of the Dixie fire remains under investigation. In July, PG&E said blown fuses on one of its utility poles may have sparked it.

The Dixie fire is one of dozens wildfires raging across the West and one of several large ones burning in and around small communities in Northern California. That includes the Monument fire, northwest of the McFarland and Dixie fires, which has burned more than 119,000 acres and caused fresh evacuations on Tuesday night. It was only 10 percent contained. 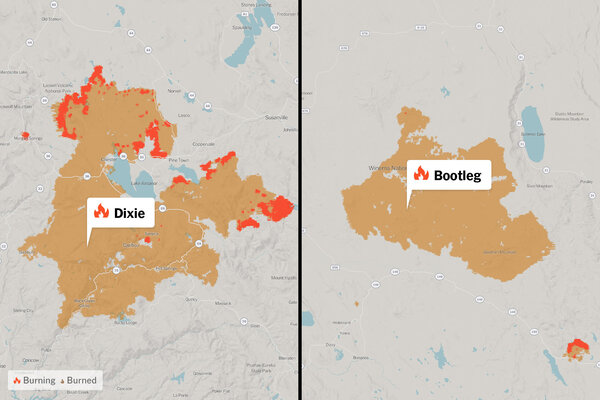 Track Wildfires in the West

Some places that were once safe havens for evacuees are now girding for the arrival of flames and smoke. The city of Susanville, Calif., for instance, has lately been a refuge for people fleeing fires in nearby communities, including the devastated town of Greenville. Now there are growing concerns that the city itself could be in the path of the Dixie fire, the state’s second-largest on record.

As of Tuesday evening, the Caldor fire, which started over the weekend in the Eldorado National Forest, was moving northeast — away from the capital, The Sacramento Bee reported. But the authorities said that fresh winds were forecast to blow over the fire on Wednesday, some of them from the northeast.

Meteorologists warned that an expected shift in wind direction across Northern California on Tuesday night could exacerbate existing fires and push wildfire smoke into the San Francisco Bay Area by Wednesday morning. The hot, northerly gusts in the forecast — known as Diablo Winds — typically blow down toward the Pacific Ocean from higher elevations in the northeast. They can make wildfires worse or cause them to spread more rapidly.

The Caldor fire has already injured at least two people and destroyed an elementary school and a post office, among other structures. The government in El Dorado County noted on Facebook late Tuesday that one of three designated centers for evacuees was full, and that a hospital down the road was nearing capacity as it handled both coronavirus patients and people suffering from smoke inhalation.

In a separate post, the hospital, the Marshall Medical Center, urged fire evacuees who had tested positive for Covid-19 to avoid coming in for treatment if they were not short of breath and did not need emergency care.

Residents of Del Rio Feel the Impact of the Migrant Crisis