The Bootleg Fire has burned more than 200,000 acres and prompted evacuations.,

The Bootleg Fire in Oregon is among more than 60 wildfires in the U.S.

The Bootleg Fire, a fast-moving wildfire in southern Oregon, has burned more than 200,000 acres, making it the largest of dozens of blazes across the United States, officials said Tuesday.

The Bootleg Fire, which began more than a week ago and remains zero percent contained, has set off a wave of evacuations and prompted more than 130 engines to respond, according to fire officials.

The National Weather Service has issued a red flag warning for areas in southwest Oregon, indicating critical fire weather conditions, through 8 p.m. on Wednesday. The wildfires in the West have been fueled by extreme drought conditions, single digit humidity and high temperatures.

Al Lawson, an incident commander, advised firefighters of the seriousness of the fire in a statement: “As you go out there today — adjust your reality,” he said. “We have not seen a fire move like this, in these conditions, this early in the year. Expect the fire to do things that you have not seen before.”

Fires were also raging in several other Western states, including California, Idaho, Montana and Arizona, where two firefighters were killed on Saturday while responding to a blaze. In Canada, fires have burned more than 500,000 acres.

As of Tuesday, nearly 918,000 acres were burned by 67 large fires across the Western United States, drawing more than 14,000 firefighters and support personnel, according to the National Interagency Fire Center.

The Beckwourth Complex, one of at least eight large fires in California, has burned nearly 93,000 acres in the Plumas National Forest and is about 66 percent contained, officials said. The fires jumped a major highway on Saturday, scorching cars and hillsides across U.S. 395. Evacuation orders across the area were reduced on Tuesday, the authorities announced.

“We want to put this fire out,” Mr. Cagle said. “I know there’s a lot of rumors out there that we’re just out here just managing it, letting the fire burn. That is not the case.”

After days of extreme heat in Canada, flames consumed the small town of Lytton on June 30, destroying 90 percent of the structures and killing at least two people. On Tuesday, there were more than 300 active fires burning across the province of British Columbia, including 34 that started in the past two days.

So far this year, there have been nearly 34,000 fires across the United States, burning more than 2 million acres, the National Interagency Fire Center said. That’s up from 2020, which saw 27,770 fires that burned about 1.6 million acres. 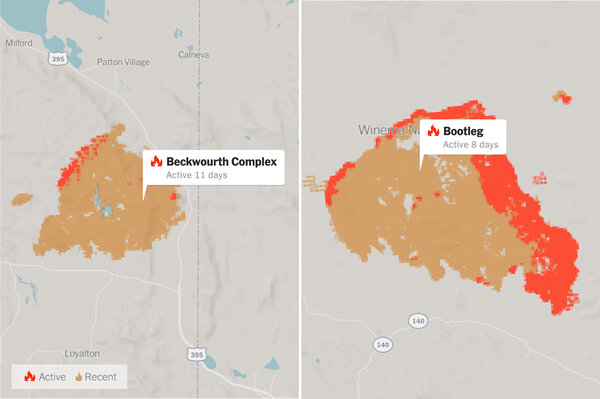 Track Wildfires in the West

See the latest on the Beckwourth Complex, Bootleg Fire and other wildfires burning in California, Oregon and elsewhere.

Shontel Brown Is Set to Be Ohio’s Newest Congresswoman