The aircraft, a firefighting helicopter, was conducting a test flight for “a new bucket water release system,” an official said.,

A firefighting helicopter crashed near a Florida airport on Tuesday night killing four.

The police department received a 911 call in regard to an aircraft crash here at the airport. Fire on scene responded to the crash site, as did some of our patrol officers that were in the area. It became immediately evident that the aircraft had crashed into a pretty heavily wooded and swampy area. So it was difficult to get back to where the main crash site was. It appears that a Black Hawk helicopter was flying training maneuvers in the immediate area of the airport. At some point, some kind of a mechanical failure evidently occurred and the helicopter went into a tailspin, at some point, the tail separated from the main body of the aircraft. The tail went on to the airport runway area and the main body of the aircraft went back into that swampy wooded area. 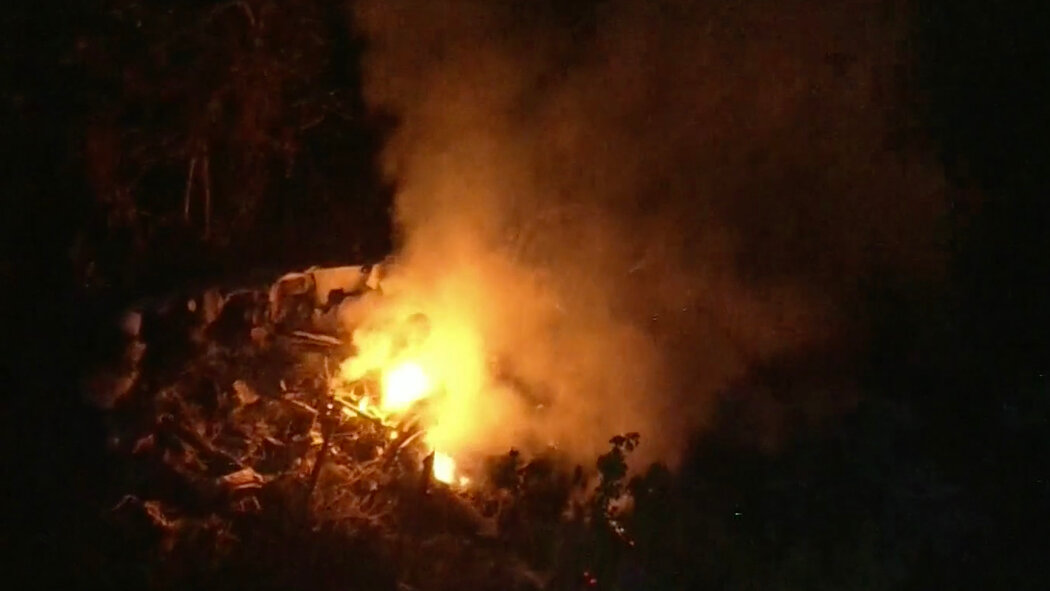 A firefighting helicopter crashed near a Florida airport on Tuesday night killing four.CreditCredit…WKMG

All four people aboard a helicopter that crashed near a Florida airport on Tuesday were killed, the authorities confirmed on Wednesday afternoon, after a nearly daylong search in which the bodies of the three unaccounted-for victims were recovered.

The four were in a Sikorsky UH-60 firefighting helicopter, also known as a Black Hawk, that crashed into a marsh near Leesburg International Airport during a training exercise at about 4 p.m. Tuesday, the Federal Aviation Administration said in a statement.

The Leesburg Fire Department confirmed one of the deaths on Tuesday evening, and crews continued searching for survivors. On Wednesday afternoon, the authorities confirmed that the three other people in the helicopter had also died in the crash. The authorities did not release the names of the four people who were killed, but said that they were all men.

At the time of the crash the helicopter was conducting a test flight for a “new bucket water release system,” said Eric Weiss, a spokesman for the National Transportation Safety Board, citing preliminary reports on the accident.

A photo taken near the crash site showed thick, black smoke billowing into the air just beyond what appeared to be the airport’s landing and takeoff areas.

“At some point, some kind of mechanical failure evidently occurred and the helicopter went into a tailspin,” Capt. Joe Iozzi of the Leesburg Police Department told Fox 35 Orlando.

The helicopter belonged to Brainerd Helicopters Inc./Firehawk Helicopters, according to the Leesburg Police Department. A representative for the company declined to comment on Wednesday.

The United States Forest Service plowed a line around the crash to prevent any vegetation fires, the fire department said.

The F.A.A. and the National Transportation Safety Board were to begin investigating the crash on Wednesday, officials said.

The episode was the latest fatal helicopter crash this year in the United States.

Five people, including the Czech Republic’s richest man, were killed on a helicopter-skiing excursion in March when their chopper crashed near a glacier in Alaska. In February, three Idaho Army National Guard pilots were killed when their helicopter crashed in bad weather during a routine training mission. About two weeks earlier, a New York Army National Guard Black Hawk helicopter on a routine training mission crashed in a rural area south of Rochester, killing three Guard members.

Two More Guantánamo Detainees Are Cleared for Transfer to Other Nations