A Deluge Unleashes Floods in a Louisiana City [Video]

Lake Charles, which had been hit by Hurricanes Laura and Delta, has had some of the worst of recent storms that have dumped more than a foot of rain in Louisiana.,

Heaving rains inundated the southwest Louisiana city this week, bringing a deluge to an area still rebuilding from the damage wrought by Hurricanes Laura and Delta last year.

Holy crap. Wow. Oh my god. Well, we’re definitely not going nowhere. Man, look at this, man. There’s literally a river in Lake Charles, man. On Ryan Street. Check this out, man. Good thing I’m sitting up high. But, man — I feel for the cars, man. 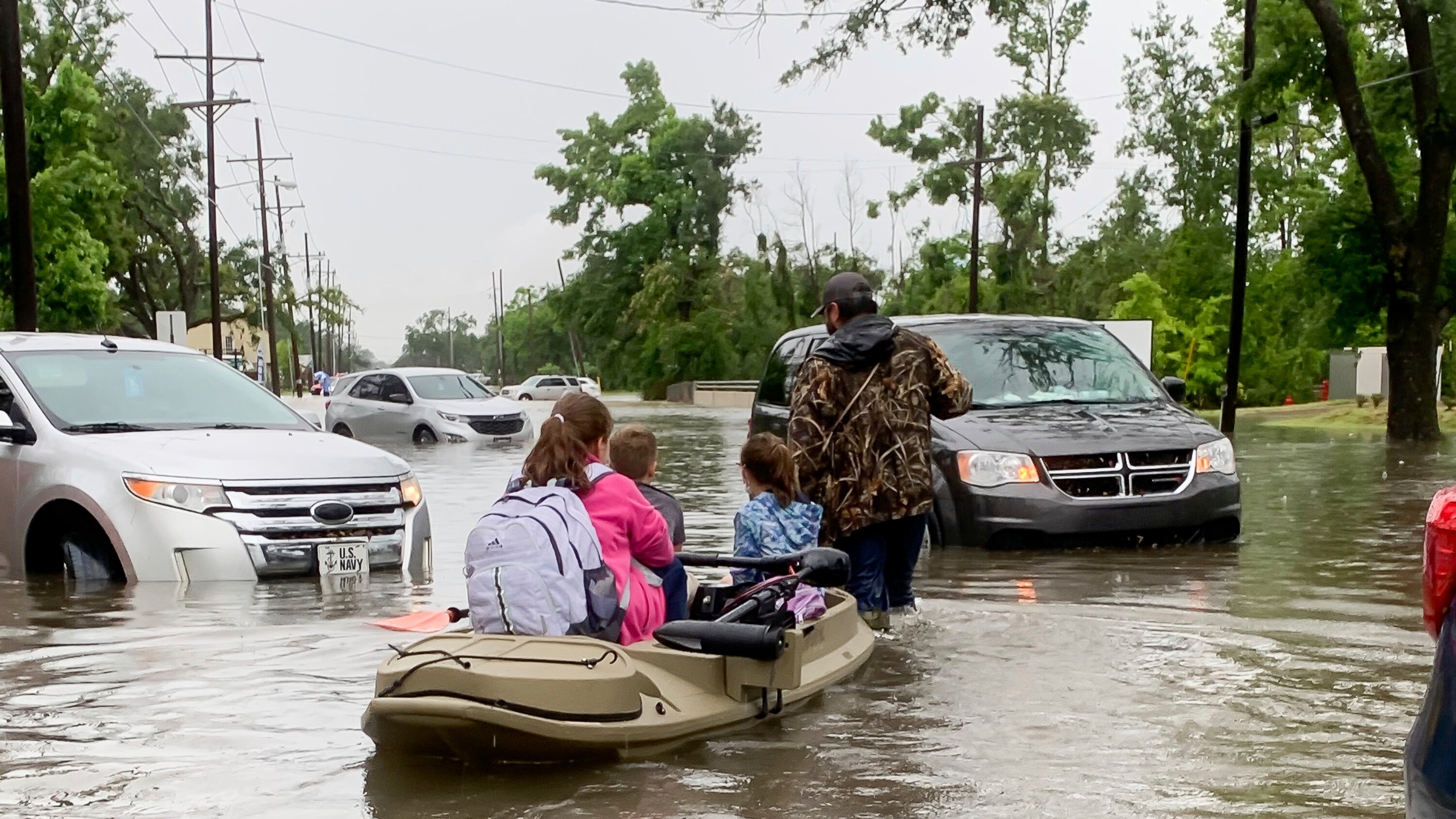 Heaving rains inundated the southwest Louisiana city this week, bringing a deluge to an area still rebuilding from the damage wrought by Hurricanes Laura and Delta last year.CreditCredit…Rick Hickman/American Press, via Associated Press

By Rick Rojas and Christiaan Mader

Slowly but surely, Lake Charles had been staggering back. In the city in southwest Louisiana, shingles had begun to take the place of blue tarps on more roofs. Signs and lampposts that were once twisted like paper clips had been replaced.

After two hurricanes pulverized the city last year, Lake Charles has been on a long and daunting road toward recovery.

But this week, Lake Charles is facing down disaster yet again.

Storms have dumped as much as 15 inches of rainfall in some places. Dozens of residents were rescued from their homes as floodwaters gushed inside and left some streets navigable only by boat and big trucks.

At least four people have died in Louisiana after a deluge that started on Monday led to flooding across much of the coast. Baton Rouge, roughly 130 miles east of Lake Charles, has had more than a foot of rain in places, prompting local officials to declare a state of emergency and stirring painful memories of the catastrophic floods that engulfed the region in 2016.

Beyond the devastation, the flooding has been a demoralizing blow for communities that have tired of their resilience being tested.

“Just insult to injury,” said Phillip Tarver, who represents Lake Charles in the State Legislature and is a car dealer in the city. “It’s been a tough nine months. It really has.”

The threat of severe storms also reached Texas this week, where forecasters warned of flooding in Houston as the ground becomes oversaturated with rainfall. “Continue to stay weather aware, and be safe,” the National Weather Service said in an advisory.

The deluge has been an anguishing reminder of the impact of a changing climate on the Gulf Coast, particularly after a hurricane season last year that was among the busiest on record.

The flooding comes after President Biden traveled to Lake Charles this month as he made the pitch for spending trillions of dollars to shore up the nation’s decaying infrastructure, vowing to not just restore the city but bolster it as it confronts climate change.

“I promise you, we’re going to build back better,” Mr. Biden said. “Better able to withstand storms that are becoming more severe and more frequent than ever.”

Lake Charles, like much of the Louisiana coast, has borne the brunt of this reality. In August, Hurricane Laura, one of the most powerful storms to ever hit the state, delivered 150 mile-per-hour winds that chewed through homes and businesses, mangling entire blocks, toppling trees and utility poles and leaving a mess that only intensified when another storm, Hurricane Delta, pounded the city in October. Some estimates found that the storms wrought more than $12 billion in damages.

“Our hearts are truly breaking,” Gov. John Bel Edwards of Louisiana said in a recent news conference. “I’m sorry that you are having to deal with this again.”

Meteorologists said most of the rainfall happened on Monday, when storms dropped 12 to 15 inches over Lake Charles in a span of less than six hours. “With the rate that fell, the drainage just couldn’t keep up,” said Jonathan Brazzell, a forecaster with the National Weather Service.

Forecasters are now warning of more rainfall in the coming days and further river flooding as the water drains out of Lake Charles. Through Friday morning, a stretch reaching from Lake Charles toward Houston may get another two to four inches, with the potential of as much as 15 inches in isolated spots. Baton Rouge might also get several more inches of rain.

In Baton Rouge, the authorities said that one man had died most likely because of power outages cutting off oxygen machines he needed, and that another man was found dead in a submerged vehicle in an underpass. In West Baton Rouge Parish, at least one man died after a car crashed into a canal. In the Lake Charles area, a man was found on Tuesday in a flooded vehicle.

In Lafayette, familiar anxieties rose with the bayou’s water level. Residents watched the clouds darken and plump just a week after squalls of rain soaked the low-lying parish and lifted the Bayou Vermilion to flood stage. Historic floods in 2016, which damaged close to 2,000 homes locally, traumatized homeowners in the region.

On Wednesday, two days after taking water for the third time in four years, customers at Kirk’s U-Needa-Butcher on Lafayette’s North Side picked through refrigerators stocked with specialty seasoned meats and walked out with Styrofoam boxes heaped with stuffed turkey wings or chicken cracklings.

Blake Gallet, the owner, said the downpour on Monday, when the sky opened up right after work, took him by surprise. A neighbor alerted him to water pushing into the shop, and he watched passing cars create a wake that spilled over the top of hastily assembled sandbags. Fifteen cars were stranded there by a sudden lake.

Looking ahead at the possibility of more rain through the rest of the week, Mr. Gallet stashed sandbags nearby, not taking any chances on a light forecast. The procedure had become frustratingly familiar.

“It’s sad that when your crew knows what they’re doing, they do it real well and it don’t take long,” Mr. Gallet said. “This is the third time we’ve had to do it, and we’re getting more efficient at it.”

Even residents spared floodwater sweated what might come. Water crept within three inches of Pam Suire’s house on Monday night. She and her husband lifted furniture onto risers ahead of the rainfall. The Suires took 14 inches of water in 2016 and have had near misses since.

“I’ve gotten pretty good at not worrying about things I can’t control,” Ms. Suire said. She and her husband are seeking a grant to lift their home. “It’ll only take a couple of feet,” she said, adding the project will be costly.

In Lake Charles, there was fear pulsing through the community over how much of their progress had been undone by the flooding.

The shock of the initial destruction from the hurricanes had long ago given way to the agonizing marathon of recovery — a series of inconveniences, bureaucratic tangles and a nagging mix of despair and frustration.

“Unfortunately, we’re seasoned in doing this,” he added. “It’s depressing, but at the same time we’re a pretty resilient bunch, and we’re going to start fixing our stuff.”

Apple Says It Turned Over Data on Trump in 2018