New video and 911 calls shed light on what led to the fatal shooting of 16-year-old Ma’Khia Bryant, who the police said was wielding a knife when an officer fired four shots at her.,

‘This Is A Failure,’ Columbus Mayor Says After Death of Ma’Khia Bryant

Mayor Andrew J. Ginther of Columbus held a news conference after the death of Ma’Khia Bryant, who was fatally shot by a police officer on Tuesday.

“Ma’Khia Bryant has been positively identified as the 16-year-old killed in this incident, and law enforcement has been in contact with her family. As I said last night, the important step now is for B.C.I. to conduct a independent and transparent investigation. The Columbus Division of Police will assist them, but we will not interfere in any investigative process that they have.” “A 16-year-old girl — a child of this community, tragically died last night. We released the officer’s body-worn camera footage as soon as possible, we’ll release all other information that we can as soon as we can. We also need to be careful about not compromising the investigation being conducted by B.C.I. We believe that transparency with the public is the utmost priority during this difficult time. Did Ma’Khia Bryant need to die yesterday? How did we get here? This is a failure on part of our community. Some are guilty, but all of us are responsible. B.C.I. will determine if the officer involved was wrong. And if he was, we will hold him accountable as we have other officers who have committed wrongdoing, criminally or in violation of the policies and procedures of the Division of Police. Transparency, accountability, absolutely critical to our community during this time of crisis.” 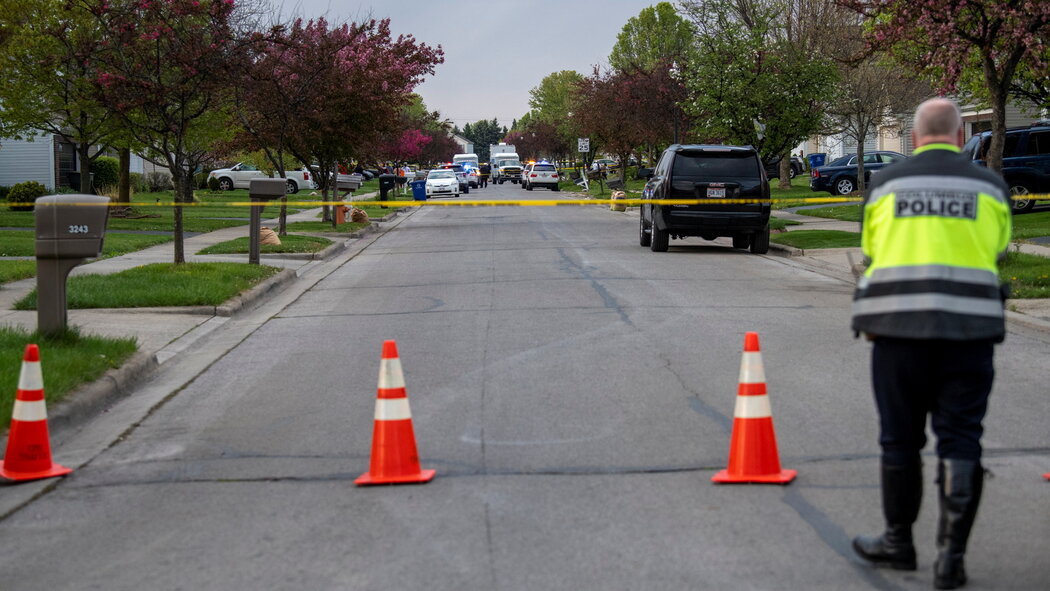 Mayor Andrew J. Ginther of Columbus held a news conference after the death of Ma’Khia Bryant, who was fatally shot by a police officer on Tuesday.CreditCredit…Gaelen Morse/Reuters

By Kevin Williams, Jack Healy and Will Wright

COLUMBUS, Ohio — It was Valentine’s Day when Ma’Khia Bryant, 16, moved into the foster home where her younger sister had lived for more than a year. The girls were close, and would dance and make TikTok videos together, while Ms. Bryant nurtured a constant hope: to one day live again with her biological mother.

“That’s all she said, was, ‘I want to be with my mom,'” said Angela Moore, who said she provided foster care for Ms. Bryant and her sister on a quiet block on the southeastern edge of Columbus, Ohio.

Those dreams were cut short after a Columbus police officer fatally shot Ms. Bryant on Tuesday afternoon, just moments after arriving at a chaotic disturbance outside her foster home. Body-camera footage released by the Columbus police appears to show Ms. Bryant holding a knife as she lunges toward another person a moment before she is shot.

Her death fanned new waves of sorrow, anger and protest on Wednesday, its timing — just minutes before a jury in Minneapolis convicted Derek Chauvin in the murder of George Floyd — a grim reminder of an unceasing tally of killings by the police.

As the White House on Wednesday described Ms. Bryant’s death as “tragic,” law enforcement authorities in Columbus pleaded for patience from the community as they released 911 calls and new body-camera videos showing the frenzied moments surrounding her shooting.

Michael Woods, the interim chief of the Columbus Division of Police, identified the officer who shot Ms. Bryant as Nicholas Reardon, and said he had been on the force since December 2019.

“Under any circumstance, that is a horrendous tragedy,” Ned Pettus Jr., the city’s public safety director, said during a news conference on Wednesday. “But the video shows there is more to this. It requires us to pause, take a close look at the sequence of events, and though it’s not easy, wait for the facts as is determined by an independent investigation.”

Mr. Pettus said a third-party investigation being conducted by the Ohio Bureau of Criminal Investigation would need to answer key questions, including what information Officer Reardon had, what he saw at the scene, and what would have happened if he “had taken no action at all.”

The first 911 call that brought the police to the house came at 4:32 p.m. on Tuesday. It is a cacophony of screaming. The caller, who sounds like a younger woman, says that someone was “trying to stab us” and had “put hands” on the caller’s grandmother. The dispatcher asks again and again whether the caller has seen any weapons.

“We need a police officer here now,” the caller responds. That person’s identity was unclear on Wednesday.

A second 911 call came in minutes later, but the caller hung up because the police had already arrived.

Unlike the agonizingly slow video showing Mr. Floyd’s death in Minneapolis, in which he calls out that he cannot breathe as Mr. Chauvin kneels on his neck, footage released by the Columbus police shows that Ms. Bryant’s killing unfolded in seconds.

Officers were dispatched to the home on Legion Lane at 4:35 p.m. on Tuesday and arrived at 4:44, according to the Columbus police.

As Officer Reardon got out of his vehicle, he encountered seven people outside a two-story brick home and asked, “What’s going on?” Yelling could be heard in the background.

An unidentified girl appeared to fall to the grass after being attacked by Ms. Bryant and then kicked by an unidentified man. The video footage then showed Ms. Bryant, who was holding a knife, appearing to lunge toward a person dressed in pink who was pinned against a car parked in the driveway.

“Hey! Hey!” Officer Reardon said as he pulled his gun. “Get down! Get down!”

He fired four quick shots, and Ms. Bryant dropped to the ground at the edge of the driveway.

A witness yelled, “Why did you shoot her?”

The officer responded, “She came at her with a knife,” apparently referring to Ms. Bryant and the person dressed in pink.

Chief Woods said Columbus officers were allowed to use deadly force to protect somebody who was in danger of being killed by another person. A Taser, he said, is generally reserved for situations where there is no immediate threat of death. Officers are not required to call out that they are about to fire their weapon, he added, though they try to if there is time.

Two experts who reviewed the body camera footage said that in this case, the officer’s use of force appeared at first glance to be justified.

Geoffrey P. Alpert, a professor of criminology at the University of South Carolina, said investigators would look at whether the officer believed that there was an imminent threat to the life of the other woman.

If there was an immediate threat, investigators will look at whether the officer could have resorted to other methods of control, he said. Dr. Alpert said that based on his own review, Ms. Bryant did appear to pose a threat to the life of the other woman.

“Were there other options? Not if she was about to stab that woman,” Dr. Alpert said, adding that a Taser could take too long to deploy, and that the less-than-lethal weapons are not 100 percent reliable. “He’s protecting her life, not his own,” he said. “What if it didn’t work and she ended up killing this woman?”

She added, “At the end of the day, it wasn’t worth all this.”

Tensions over police shootings of Black people were already raw around Columbus. In early December, Casey Goodson Jr., 23, was shot to death at the entrance of his home by a Franklin County sheriff’s deputy who had been searching for someone else. Two weeks later, Andre Hill was shot by a Columbus police officer who was later charged with felony murder.

Ms. Moore said that she was at work during the shooting, but that she believed the fight began over an argument about housekeeping. She said one of her former foster children had visited the home on Tuesday and criticized Ms. Bryant and her sister for having messy bedrooms.

“That’s where the problem came,” Ms. Moore said. “I didn’t know they had called the police.”

Ms. Moore said that Ms. Bryant had moved into her home on Feb. 14, and that she was one of three foster children living there, including her sister.

Ms. Bryant’s family expressed dismay and outrage at her death, and described Ms. Bryant as sweet and caring. They said she should still be alive.

“This could have been de-escalated by the Columbus Police Department,” Don Bryant, a cousin of Ms. Bryant’s mother, said. “There are things you can do to avoid pulling out your gun and shooting someone. I question the use of force.”

Mr. Bryant said he did not know how Ma’Khia Bryant had ended up in foster care. But he said that her mother, Paula Bryant, who works as a nursing assistant in Columbus, had been working toward a reunion.

“Paula was working extremely hard to get Ma’Khia back into her home, working to do everything right,” Mr. Bryant said.

Ms. Bryant had been enrolled at Independence High School in Columbus in February. Jacqueline Bryant, a spokeswoman for Columbus City Schools who is not related, said her teachers reported that in the short time Ms. Bryant was there, she was “very respectful, attended school each day, and was eager to learn.”

On Legion Lane, where a memorial of flowers and stuffed animals was growing on Wednesday, neighbors were still stunned. Chris Mitchell, 31, who was visiting from another city, was playing with his two children in a nearby backyard when he heard “very loud arguing” followed by gunshots about two minutes later.

“I came out and saw a young lady on the ground,” Mr. Mitchell said.

Israel Reales, 19, said his mother, Nahomi, was unloading groceries from her car when she heard gunshots. She went outside and saw people with their hands up. She relayed the story through her son, who interpreted.

Activists who spent Tuesday demonstrating at the scene of the shooting marched on late Wednesday afternoon toward Police Headquarters, and said they planned to demand answers and accountability.

“They didn’t de-escalate the situation,” said DeJuan Sharp, an organizer with a local Black Lives Matter group called the Downtownerz. “I don’t know why the gun was the first thing for him to use.”

15 Hours and 9 Waffles Later, a Fantasy Football Punishment Is Complete

High Hopes for Johnson & Johnson’s Covid Vaccine Have Fizzled in the U.S.