The request to Attorney General Garland Merrick B. Garland comes after he and President Biden vowed to use the powers of the federal government to fight racial injustice.,

Mother of Tamir Rice, a 12-year-old killed by the police, asks D.O.J. to reopen its investigation.

The family of Tamir Rice, a 12-year-old boy who was shot and killed in 2014 by the Cleveland police, has asked Attorney General Merrick B. Garland to reopen the Justice Department’s investigation into the shooting, which was closed in December after the department said it could not charge the officers.

“The election of President Biden, your appointment, and your commitment to the rule of law, racial justice, and police reform give Tamir’s family hope that the chance for accountability is not lost forever,” lawyers representing Tamir’s mother, Samaria Rice, wrote in a letter to Mr. Garland on Friday. “We write on their behalf to request that you reopen this investigation and convene a grand jury to consider charges against the police officers who killed Tamir.”

Tamir Rice’s killing was one of several flash points in the long national debate over race and policing that reached a breaking point last summer, after video circulated of Minneapolis Police Officer Derek Chauvin kneeling on the neck of George Floyd, a Black motorist, for more than nine minutes before Mr. Floyd died. 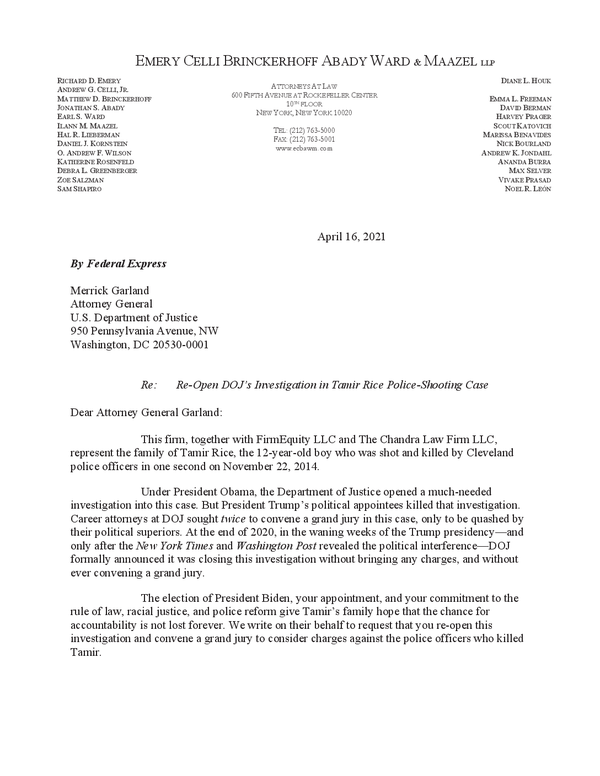 Letter From the Family of Tamir Rice to Attorney General Merrick B. Garland

The family of Tamir Rice, a 12-year-old boy who was shot and killed in 2014 by the Cleveland police, has asked Attorney General Merrick B. Garland to reopen the Justice Department’s investigation into the shooting.

The request to reopen the inquiry into Tamir’s shooting comes against the backdrop of Officer Chauvin’s ongoing murder trial, the recent fatal police shooting of Daunte Wright in a Minneapolis suburb, and newly released police body camera footage of an officer in Chicago shooting a 13-year-old boy after he discarded a gun and seemed to be raising his hands.

The request to Mr. Garland also comes after he and Mr. Biden have vowed to use the powers of the federal government to fight racial injustice, with a focus on discriminatory policing practices.

The Justice Department has opened investigations into the police killings of Mr. Floyd and Breonna Taylor, a Louisville woman who was shot in her bed by the police. But it would be highly unusual for the department to reopen an investigation that it had already closed.

Immediately after Tamir’s shooting, the Justice Department opened a civil rights investigation into the shooter, Police Officer Timothy Loehmann. But some prosecutors felt it would be challenging to prove that the officer had intentionally violated the child’s civil rights. The pellet gun the boy had been playing with looked real and a 911 dispatcher had not relayed that Tamir was possibly a juvenile holding a toy. Officer Loehmann shot him immediately upon arriving.

But in 2017, career prosecutors had asked to convene a grand jury to gather evidence that Officer Loehmann and his partner had given false statements about whether the boy had been given warnings to put his hands up, possibly allowing prosecutors to bring an obstruction of justice case.

That request was denied by department officials in the Trump administration and all but closed, though Tamir’s family was never told. The issue was brought to light in October when The New York Times reported that a whistle-blower told the Justice Department’s inspector general that officials mishandled the case. Former Attorney General William P. Barr officially closed the case in December, after officials concluded that the video footage of the shooting was too grainy to be conclusive.

“I’m asking D.O.J. to reopen the investigation into my son’s case; we need an indictment and conviction for Tamir’s death,” Ms. Rice said in a statement on Friday.

Two More Guantanamo Detainees Are Cleared for Transfer to Other Nations